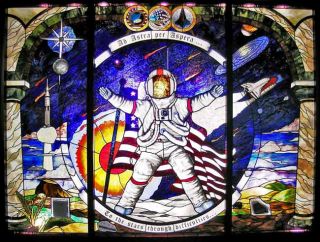 The Kansas Cosmosphere and Space Center has unveiled a stained glass tribute to the 17 astronauts whose lives were lost in the Apollo 1 fire and space shuttle Columbia and Challenger accidents.
(Image: © Kansas Cosmosphere.)

Beginningtoday, visitors to the Kansas Cosmosphere and Space Center in Hutchinson mayfind themselves moved to a more a reverential state of mind.

"Peoplewould actually walk by [it] and whisper... it had this glow about it, thisaura," said Randy Rayer, CEO and president of Rayer's Bearden StainedGlass Supply in an interview with collectSPACE.

"Youjust get this feeling [looking at the glass] that you should be reverent," he added.

Theartwork's design memorializes the men and women whose lives were lost in the1967 Apollo 1 pad fire and the in-flight accidents that occurred during spaceshuttles Challenger and Columbia's 1986 and 2003 final missions, respectively.

Etched intothe top of the glass are the names of the 17 fallen astronauts.

Central inthe glass's focus is an astronaut posed with outstretched arms and legs,reminiscent of Leonardo da Vinci's Vitruvian Man. Surrounding"him" are planets and galaxies, as well as a Saturn IB rocket andspace shuttle launching towards the heavens.

"Thethematics around [the astronaut] were a combination of symbols related to thetriumphs and tragedies of space flight," Cosmosphere President and CEOJeff Ollenburger told collectSPACE, "but their real purpose was tocapture the spirit of space flight -- even amidst the difficult times the needto explore needs to continue to come out."

"Wewrapped the Kansas state motto around [the Apollo astronaut] -- Ad Astra perAspera [To the stars through difficulty], and that really made this projectcome to life," said Ollenburger.

At the footof the glass are three encased artifacts that each have a connection to one ofthe lost crews.

"Theitems embedded in the glass are components from -- as it relates to the shuttleprogram -- two earlier flights that were removed after flight and part of ourcollection: a white tile and a black tile from Columbia and Challenger,"explained Ollenburger. "Then we worked with contacts in Florida to come upwith a piece of Pad 34, an electrical component, and that was our tangibletie-in to [Apollo 1]."

At thebottom of the glass are the names of 19 artists, along with a description ofthe work they contributed to the piece.

"Therewere several people who really wanted to help," recounted Rayer, "soI hand selected 19 of some of the best glass artists in Kansas."

"Therewere certain artists that were good at fusing glass, some were good at leadingglass... so we split it up."

"Weactually had almost 4,000 hours [of artist time] in it," tallied Rayer.

"Just my two team members, Beth Palyash and Doug Bozeman, who I brought into just head up the project, they actually have 1,200 hours [between] the two[of them] together, changing drawings, choosing glass, calling artists, makingsure this went together, re-cutting something that wasn't right... I mean, theymight take an 8-foot (2.4-meter) square piece of glass and they might take just two inchesout of the center of it, because they want the color right here. They woulddestroy a whole sheet of glass to get just one asteroid," he added.

"I wasstanding in awe [of them] most of time, saying 'Oh my gosh, that's awesome.'So, I don't want to take all the credit," said Rayer. "I did put thepool together, but in the very end, everybody was swimming in it. It wasgreat."

"Ihave to admit that pictures do not do it justice," said Ollenburger."The color detail and the texture changes as the light moves across it. Asyou stand before it and as you move around the piece, it just seems to comealive."

"That'sreally the tribute we were trying to accomplish," Ollenburger said.

"Thefuture of space flight is continuing and its always changing and it's alwaysmoving," he added. "It is as breathtaking as anything that you can imagine. Ithink that art does that. It does as good a job, or a better job than anythingof capturing something that most of us, unfortunately, will never get toexperience."

Above allelse, Ollenburger hopes that visitors will be able to relate the theme of thetribute to their own lives.

"Themajor theme of 'to the stars through difficulties' we hope resonates," he said. "Not allof us get to fly in space, but we have all faced challenges and all have haddark moments that we can either choose to emerge from and continue to pushourselves, or we can accept that fate and regress. Space flight is all aboutpicking up that torch from those who have gone before us and continuing thatjourney; not forgetting that sacrifice but learning from it."

"Ithink there is a tremendous spirit that can be shared with everybody when youaccept that challenge and keep the mission going," Ollenburger said.