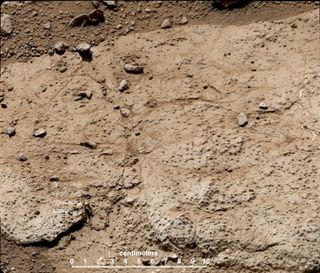 This patch of bedrock, called "Cumberland," has been selected as the second target for drilling by NASA's Mars rover Curiosity. Image released May 9, 2013.
(Image: © NASA/JPL-Caltech/MSSS )

Cumberland lies just 9 feet (2.75 meters) west of the rock called "John Klein," where Curiosity drilled a 2.5-inch-deep (6.4 centimeters) hole back in February. The rover's analysis of John Klein samples allowed mission scientists to conclude that Mars was capable of supporting microbial life billions of years ago.

The main purpose of drilling a second hole nearby is to confirm this big discovery, researchers said. [Ancient Mars Could Have Supported Life (Photos)]

"Primarily, it will be to duplicate the results from the first hole, because they were so exciting and, in some cases, unexpected that the people who run the experiments just want to make sure it's really correct before writing all the papers up," Curiosity deputy project scientist Ashwin Vasavada, of NASA's Jet Propulsion Laboratory in Pasadena, Calif., told SPACE.com earlier this week.

The Curiosity rover will make the short drive to Cumberland in the coming days, NASA officials said. Like John Klein, the rock shows many signs of exposure to liquid water in the distant past. For example, both rocks are shot through with mineral veins and studded with erosion-resistant bumps.

"The bumps are concretions, or clumps of minerals, which formed when water soaked the rock long ago," NASA officials wrote in an update Thursday. "Analysis of a sample containing more material from these concretions could provide information about the variability within the rock layer that includes both John Klein and Cumberland."

After Curiosity finishes drilling at Cumberland and wraps up a few other science operations nearby, the rover will likely begin the 5-mile (8 kilometers) trek to the base of Mount Sharp, officials said.

This mysterious mountain rises 3.4 miles (5.5 km) into the Martian sky from the center of Gale Crater, where Curiosity touched down last August. Mount Sharp's foothills are the rover's ultimate science destination.

The mountain's base shows signs of long-ago exposure to liquid water, providing an intriguing target. The mission team also wants Curiosity to read the Red Planet's environmental history like a book as it climbs up Mount Sharp's lower reaches.

Drilling at Cumberland will be Curiosity's first big science operation in a while. Mission controllers didn't send any commands to Curiosity for most of April, because Earth and Mars were on opposite sides of the sun from each other in an alignment known as a Mars solar conjunction.

Curiosity monitored Red Planet radiation and weather during conjunction and also performed some other relatively simple science tasks using a set of commands sent up in advance, Vasavada said.