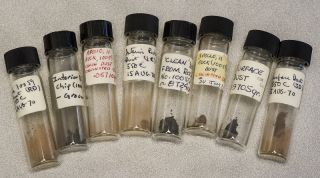 Vials of moon dust brought back to Earth by the first men on the moon have been found inside a lab warehouse in California after sitting in storage unnoticed for more than 40 years.

The samples — collected by Apollo 11 astronauts Neil Armstrong and Buzz Aldrin — were rediscovered last month by an archivist who was going over artifacts tucked away at the Lawrence Berkeley National Laboratory.

"We don't know how or when they ended up in storage," Karen Nelson, who made the surprising discovery, said in a statement from the lab.

Nelson came across about 20 vials with handwritten labels dated "24 July 1970," packed in a vacuum-sealed glass jar. Accompanying the jar was an academic paper published in the Proceedings of the Second Lunar Science Conference in 1971, titled "Study of carbon compounds in Apollo 11 and Apollo 12 returned lunar samples."

All of the authors of the paper were from the University of California, Berkeley's Space Sciences Laboratory, including Nobel Prize-winning chemist Melvin Calvin, who worked with NASA on efforts to protect the moon from contamination during the first lunar landing, as well as plans to protect Earthlings from unknown pathogens feared to be lurking in lunar dust.

The moon dust samples were supposed to be sent back to NASA after the Space Sciences Laboratory team finished their experiments. By some wrong turn, they ended up in storage.

After making the discovery, Nelson contacted officials at the Space Sciences Laboratory. "They were surprised we had the samples," she said.

Nelson then got in touch with NASA officials, who allowed her to open the jar to remove the vials before she returned them to the space agency, according to the statement from Berkeley.

In all, NASA's moonwalking Apollo astronauts brought 842 pounds (382 kilograms) of lunar samples back to Earth between 1969 and 1972, and very little of it is thought to be unaccounted for.

Of the 68-gram batch of lunar material distributed to Calvin and his collaborators in 1970, NASA knew that only 50 grams was returned, said Ryan Zeigler, NASA's Apollo sample curator at the Johnson Space Center in Houston.

Space agency officials assumed that the unaccounted-for 18 grams had been destroyed during testing. Zeigler thinks the rediscovered, roughly 3-gram sample likely ended up in storage as a result of some miscommunication.

"Given the lengths taken to preserve the samples, this does not appear to have been an attempt of deliberate deception, but likely a miscommunication where some of the material was retained for ongoing or expected future studies which never happened," Zeigler wrote in an email. "Why they were never returned is unclear."

The vials have been returned to NASA's sample vault, the curator said, but it is possible that the samples could one day end up back in a lab.

"I do not know whether these samples will be studied again, but this sample (10059) is a very interesting Apollo 11 breccia that is in short supply, so I believe there is a good chance that this material could be used to fill future requests for this sample," Zeigler added.