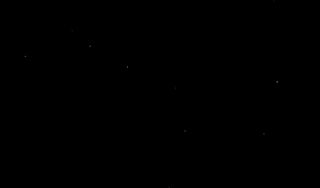 Around the area where I live, in a suburb to the north of New York City, we occasionally get reports of bear sightings — either a bear or bear cubs will wander aimlessly through local streets or perhaps rummage through neighborhood garbage cans looking for food.

These black bears usually remain within the confines of a nearby state park, but let me assure you, seeing one roaming around in your backyard will get your attention very quickly.  But this only happens early in the spring; for the rest of the spring and summer they’re back within their normal habitat.

By mid or late fall, these creatures go into hibernation. Indeed, the American black bear (Ursus americanus) can go up to 100 days without waking up. Most bears generally enter hibernation in October and emerge sometime in April or May, when their food is plentiful again. [Image Gallery: Best of Bears]

And so it is at this particular time of the year that the celestial Big Bear seems to follow its earthly cousins — having spent the winter season lying low to the northern horizon, it is now roaming prominently across our evening sky.

Step outside around 10 p.m. local daylight time this week and crane your neck nearly overhead and toward the north and you’ll see the seven bright stars that compose the famous Big Dipper. At this time of the year, the bowl appears tilted down, draining its unknown contents toward the northern horizon.

Scholars are fairly sure that the oldest of our star groups trace back to the Mesopotamian peoples of five or more millennia ago. In fact, the creatures that make up the ancient Western constellations are similar to those in the Bible, and there hints that some are far older.

The fact that the Big Dipper formed a bear to American Indians and to the cultures of the Old World and Siberia suggests that the star pattern we have come to call Ursa Major is actually a piece of Stone Age culture perhaps as much as 8,000 to 12,000 years old. That is the estimated era of the last migration from Siberia to North America across the Bering Strait. [Top 10 Mysteries of the First Humans]

The Greek word for bear is arktos (from which we get the word "arctic"). So Ursa Major likely represents not a black or grizzly bear, but a polar bear.

But those mists of antiquity can indeed be misty.

Was it a drinking gourd?

For example: The Big Dipper itself has always been a source of frustration to some constellation historians. Exactly who came up with this name?

For much of the world this pattern has been seen as, if not a bear, then some sort of a wagon; in the United Kingdom it’s popularly known not as a dipper, but as a plough. As a long-handled ladle or pan, it is strictly an American phenomenon, mentioned in 19th-century books but not before.

Perhaps there is some connection between the Dipper and the "Drinking Gourd Song" sung by slaves in the pre-Civil War south, some of whom managed to flee north to the Ohio River and ultimately on to freedom.

"Follow the Drinkin’ Gourd" was a song supposedly used by an Underground Railroad operative to encode escape instructions and a map. As it turns out, a drinking gourd referred to a hollowed-out gourd used by slaves as a water dipper. But here it was used as a code name for the Big Dipper. And indeed, the two outer stars in the Dipper’s bowl (Dubhe and Merak) point to Polaris, the North Star.

The tale of the tail

Getting back to the subject of bears, well-known early 20th century amateur astronomer William Tyler Olcott wrote the following of Ursa Major in his 1929 "Field Book of the Skies:" "By no stretch of the imagination can the figure of a bear be traced out of the stars in this region, and it is one of the great mysteries as to how the constellation came to be so named." Fair enough.

But then, just two pages later, Olcott carefully identified all the parts of the bear!

The stars Alkaid, Mizar and Alioth, which form the handle of the Dipper (or Plough), always cause a problem. Anyone who has seen a bear in a zoo knows that bears do not have long tails like a German shepherd, but short stubby ones instead.

When I point Ursa Major out to audiences at the Hayden Planetarium at the American Natural History Museum in New York City, I tell the story about how the Roman god Jupiter changed the nymph Callisto into a bear, then hoisted her up into the sky to escape the wrath of his wife Juno.

Callisto was a veritable bear, complete with sharp teeth and claws, so Jupiter grasped her by her stubby tail. But because she was so very heavy, her tail (supposedly) stretched on the long trip up to the sky!

A final note: This is the time of year that the Big Dipper is visible during evening hours well south of the equator.

In fact, the figure of an upside-down Dipper can be seen resting just above the northern horizon as far south as 30 degrees south latitude, which encompasses two-thirds of Australia.

In his classic star guide, "The Stars: A New Way to See Them," author H.A. Rey drew a cartoon of a kangaroo with a joey in her pouch over the caption, "The Dipper? Never seen it . . ." That comment obviously would apply only to kangaroos who live as far south as Melbourne or Sydney.

Then again, you don’t see too many kangaroos roaming the streets of Melbourne or Sydney. Or bears, for that matter!