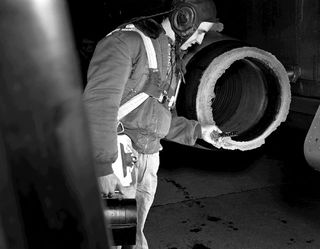 In this historical photo from the U.S. space agency, the J-34 engine is shown on Nov. 30, 1948 with icing at the Lewis Flight Propulsion Laboratory, Cleveland Ohio. The J-34 engine was built by the Westinghouse Corporation and was used on such aircraft as the Lockheed C11-122 Neptune and the McDonald XF-85 Goblin. Lewis Research Laboratory became John H. Glenn Research Center in 1999.