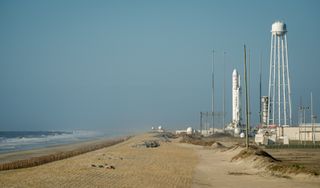 The launch debut of a new privately built rocket will have to wait at least one more day after strong winds thwarted an attempted liftoff on Saturday (April 20).

The unmanned Antares rocket was poised to launch into orbit Saturday afternoon from a new seaside pad at NASA's Wallops Flight Facility along Virginia's Eastern Shore when the foul weather intervened. The rocket's next chance to launch occurs Sunday (April 21) at 5 p.m. EDT (2100 GMT).

Orbital Sciences had hoped to launch Antares at 5 p.m. EDT on Saturday, but unacceptably strong winds in the upper atmosphere — which could pose a risk to the rocket in mid-flight — prompted them to delay liftoff by an hour at first, then call off the attempt altogether. [LaunchPad Photos: 1st Antares Rocket Ready to Fly]

It is the second delay in three days for Antares' debut launch. A minor equipment glitch led Orbital officials to call off a launch try on Wednesday (April 17) when a data cable at the pad separated from the rocket earlier than planned.

Built by the Dulles, Va.-based spaceflight firm Orbital Sciences Corp., the Antares rocket is a 13-story booster designed to launch the company's unmanned Cygnus spacecraft on cargo delivery missions to the International Space Station. Orbital has a $1.9 billion contract to provide at least eight cargo delivery flights to the station using Cygnus and Antares.

For this first flight, the Antares rocket will not be carrying an active Cygnus spacecraft into orbit. Instead, the rocket is topped with a cylindrical "mass simulator" that mimics the shape and weight of an actual Cygnus vehicle, officials said. The mockup is also equipped with 70 sensors to measure the effects of launch on an Antares vehicle.

Orbital has also added three tiny NASA satellites — coffee-cup-size Phonesats — and a small commercial cubesat called Dove-1 to the mass simulator for this test flight. The miniature satellites will be deployed in orbit after launch, Orbital officials said.

NASA's Phonesats are experiments designed to test how well commercial smartphones can be used as the main computers on cheap satellites.

Orbital Sciences is one of two American spaceflight companies with NASA contracts for  commercial resupply missions to the International Space Station. The other firm is Space Exploration Technologies (SpaceX) of Hawthorne, Calif., which has a $1.6 billion contract to fly at least 12 cargo delivery missions to the space station using its Falcon 9 rockets and robotic Dragon space capsules.

SpaceX launched its first test flight to the station in May 2012 and has flown two official cargo deliveries since then. NASA retired its space shuttle fleet in 2011 and is relying on private spacecraft to keep the space station stocked with supplies. The space agency also plans to begin flying American astronauts to the station on commercial spacecraft by 2017.