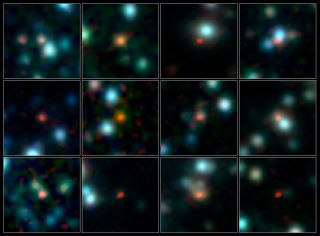 A stunning new image from a giant telescope in Chile shows more than 100 ancient, star-forming galaxies in greater clarity than ever before.

The picture, released today by the European Southern Observatory, represents some of the first observations done by the Atacama Large Millimeter/submillimeter Array (ALMA) — a group of high-powered telescopes arranged on a high plateau in the Chilean desert.

Scientists using ALMA turned their attention to a patch of sky in the southern constellation of Fornax, "The Furnace," and gathered data in order to sharpen the resolution of images captured by another ESO telescope, APEX (short for the Atacama Pathfinder Experiment). [See Photos of ALMA]

"Astronomers have waited for data like this for over a decade," Jacqueline Hodge of the Max-Planck Institute in Germany, a scientist involved in the new research, said in a statement. "ALMA is so powerful that it has revolutionized the way that we can observe these galaxies, even though the telescope was not fully completed at the time of the observations."

APEX had set its sights on the full-moon-size patch of sky to conduct a sweeping search for fertile (or star-forming) regions of far-off galaxies. Although the survey created the "best map so far," it still wasn't as clear as scientists were hoping, ESO officials said.

That's where the ALMA radio telescope came in. By pointing ALMA at each suspected galaxy for two minutes apiece, the telescope was able to find every star-forming galaxy within a region 200 times smaller than that of the APEX photos.

"We previously thought the brightest of these galaxies were forming stars a thousand times more vigorously than our own galaxy, the Milky Way, putting them at risk of blowing themselves apart," Alexander Karim of Durham University in the United Kingdon, who was also associated with the research, said in a statement. "The ALMA images revealed multiple, smaller galaxies forming stars at somewhat more reasonable rates."

ALMA can see farther and deeper in certain wavelengths of light than any other radio telescope in history. The $1.3 billion observatory took 10 years to construct and has 57 dishes working right now. By summer, ALMA is expected to be fully operational with 66 telescopes online.