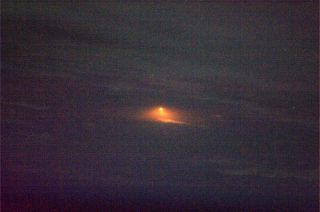 Residents of the International Space Station had a unique perspective when a Russian Soyuz rocket carrying three new space station crewmembers blasted off within eye shot of the orbiting outpost as the rocket started its journey to the station on March 28, 2013.
(Image: © Canadian Space Agency/Chris Hadfield (Cmdr_Hadfield))

Rocket launches aren't just amazing sights for people on Earth. They wow astronauts in space, too.

The latest example comes from Canadian astronaut Chris Hadfield, who captured a surprising view of a Russian Soyuz rocket launching to the International Space Station blasted off on March 28. From Hadfield's viewpoint on the space station, the Soyuz rocket appeared as a bright orange glow rising from the Earth's surface.

Hadfield, who commands the space station's Expedition 35 crew, posted a photo of his unique view of the Soyuz launch on Twitter.

"Just watched the Soyuz launch! The rocket's red glare, powering up away from the Earth, turning towards us in hot pursuit. Incredible to see," Hadfield wrote. The astronaut posted the actual photo on Twitter later in the evening after the Soyuz had arrived at the station.

"Tonight's Finale: Soyuz Rocket Launch — the moment of ignition, as seen from their target, the Space Station," Hadfield added.

Usually, space station residents cannot see their future crewmates as they start their journey into orbit, but the launch last week was a special exception. The space station passed over the Soyuz rocket's launch site (Baikonur Cosmodrome in Kazakhstan) just minutes before the rocket carrying NASA astronaut Chris Cassidy and Russian cosmonauts Alexander Misurkin and Pavel Vinogradov launched into orbit on a speedy, six-hour "express" trip to the orbiting lab.

While Russia has launched quick one-day flights from Earth to the station  using unmanned Progress cargo ships before, the March 28 Soyuz launch marked the first time the flight plan included a human crew.

Before this launch, it took two days for the Soyuz astronauts to dock with the station, but now astronauts will not have to spend as much time in the cramped capsule on their way to the orbiting outpost.

Cassidy, Misurkin and Vinogradov join Hadfield, NASA astronaut Tom Marshburn, and Russian cosmonaut Roman Romanenko on board the International Space Station to round out the Expedition 35 crew. Romanenko, Hadfield and Marshburn are set to return to Earth in May.