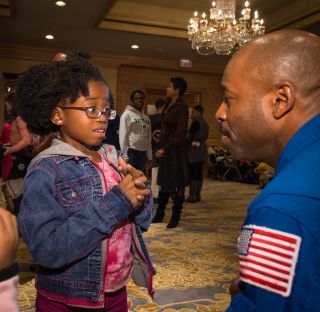 Laura Woodmansee is a writer based in Southern California. She holds an M.S. in Journalism from USC’s Annenberg School for Journalism and is the author of the books "Women Astronauts," "Women of Space: Cool Careers on the Final Frontier," and "Sex in Space." She contributed this piece to SPACE.com's Expert Voices: Op-Ed & Insights.

By now, I hope you’ve heard that NASA has put into suspended animation many of its educational and non-media public outreach, including their STEM (science, technology, engineering, and math) education programs. This is until it can review all of those programs.

It sounds like an April Fools' Day joke, doesn’t it? Believe me, it’s real. If you hadn’t heard about all this, it’s probably because the various news media haven’t covered it much. It seems to me that the American people (and the world) ought to know what's happening.

I understand that NASA was forced to make some cuts in order to abide by the sequester. But, I’d never have thought our space agency would even consider pausing or deleting so much of something so important to the future of NASA and of the United States as education and outreach.

I hope that these cuts are temporary, a way to force Congress into repealing the sequester for NASA. If it's not, and these cuts are made permanent, the world will lose something special — that NASA magic. [Petition Asks White House to Reverse NASA Outreach Sequester Cuts]

If you think this doesn’t affect you, think again. NASA’s educational and public outreach programs are the key to letting the public know about space science. What comes out of those programs inspires a whole new generation of scientists and engineers, and even artists and writers like myself. By cutting education and public outreach, NASA is shooting itself in the foot. NASA outreach works hard to let the public know just what the space agency does — without information, what public interest there is in NASA will fade away.

NASA outreach also inspires kids each year via thousands of school events, conferences, tours, robot tournaments and other fun educational activities. By cutting outreach, NASA risks being responsible for millions of kids and adults not being interested in science, technology, engineering and math. What inspired at least two generations of Americans and others worldwide will be gone. Will kids be aware of what is going on in space science? Probably not. There will be no cool space cards handed out at school by a NASA scientist, engineer or astronaut; no science experiment fun sheets courtesy of NASA outreach and STEM programs. In the long term, if fewer people are interested in space science, there may be no space program at all.

Cutting back, or even halting, NASA’s educational outreach programs amounts to sacrificing the future for a bit of a financial break today. It is the scourge of our times. In the United States, optimism for the future used to be our defining characteristic. At one time, NASA embodied the future. Now, we are stuck in the present and unable to imagine a future where economics will again seem, well, good.

So the sequester is hitting NASA hard, at its heart. Sure, some education and outreach programs have been added to the “exempted” list, and the situation doesn’t look quite as bleak as it did when the memo first came out on March 22. But, many good programs are still in danger.

You may think "what can I do?" I suggest you share this news, or this article, with your friends, family and acquaintances who have any sort of interest in space, engineering or technology.  You can also contact your congressional representative. With enough people contacting the NASA director’s office and congressional representatives, then perhaps we can change things for the better.

Read Woodmansee's most recent Op-Ed: Sex in Space: Is it Unethical to Conceive a Child Out There?