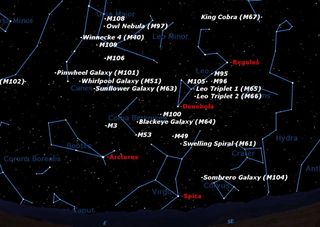 Spring is the season for hunting galaxies. Look eastward around 10 p.m. this weekend to explore “the realm of the galaxies.”
(Image: © Starry Night Software)

As the saying goes, "In the spring, a young man's fancy lightly turns to thoughts of love."

But if the young man is an astronomer, his fancy will likely also turn to thoughts of galaxies. Spring is truly the best season to hunt down and observe these cosmic Easter eggs of the night sky.

Take a look at the chart, which shows the view this coming weekend (March 30) looking to the east. In and around the triangle of first-magnitude (bright) stars Regulus, Arcturus and Spica are a vast number of distant galaxies. [Photo Gallery: 65 All-Time Great Galaxy Hits]

Timing is critical for observing the spring galaxies. Because the nights are getting shorter, there is only a brief window of opportunity before the galaxies are gone and the summer skies are with us.

This week, we have a full moon, but by the weekend, that moon will not be rising until after midnight. This gives us a couple of hours for galaxy hunting. Next weekend will be even better.

If you’re new to deep sky observing, prepare to be challenged. Experienced observers will tell you that the spring skies are crammed with bright and easy galaxies, but beginners will be challenged to find even one of them. That’s because galaxies are about the faintest things your eyes will ever see. The light from the galaxies has been traveling for millions of light years, and there is not very much left by the time it reaches your eyeballs.

The first secret is to search out very dark skies. Any form of light pollution, be it natural moonlight or artificial city lights, will destroy your chances of spotting galaxies. Spring galaxy season makes field trips to dark sky sites a necessity. Your local astronomy club is a wonderful resource. Chances are that they have scouted out the darkest sites in your region, and will be gathering there over the next couple of weekends to hunt down galaxies.

A second trick is to use averted vision when looking for faint objects. Instead of looking directly at the point where you expect the object to be, look slightly to one side. This will put the object on a more sensitive part of your eye’s retina.

Thirdly, give your telescope a light tap. Our eyes are programmed to see moving objects better than still ones, so making the telescope view move a little will often cause a faint object to pop out of the background.

Once you’re at a dark site, you will need a number of tools. I’d recommend a telescope with at least 6 inches (150 mm) aperture; 8 or 10 inches would be better. A wide field eyepiece is best for finding your targets; then switch to a higher magnification, around 100x, to study them in detail.

A pair of 7x50 or 10x50 binoculars used to locate the fields and figure out the best star-hopping routes is as important as a telescope. A good star atlas, like the "Sky & Telescope Pocket Sky Atlas," or a good planetarium program on a laptop computer, will guide you. Finally, a red flashlight, a comfortable seat and warm clothing will round out your kit.

The majority of the galaxies in our skies are concentrated in a rather small area, best placed at this time of year. Looking east around 10 p.m., you will see the Big Dipper on your upper left and three bright stars straight ahead forming a large triangle. Follow the curving handle of the Big Dipper away from the bowl and you first come to Arcturus in the constellation Boötes, then to Spica in the constellation Virgo. Above and to the right is Regulus in Leo.

Many of the objects in Charles Messier's catalog are shown in this chart, labeled in white. This 18th-century comet hunter was the first to catalog the many deep sky objects which confused him in his searches for comets. Nowadays, amateur astronomers try to observe the 110 objects in his catalog as the best and brightest deep sky objects in the sky. Nearly half of the objects he cataloged are visible in this single small area of sky in our chart; only the brighter ones are shown here. Of these, almost all are galaxies, with only a few exceptions.

Many of Messier’s objects have distinctive nicknames, but many more are known simply by their catalog numbers. Although baffling to beginners, experienced observers soon become as familiar with the Messier numbers as they are with the streets in their hometown.

The vast majority of Messier’s galaxies are concentrated in the five constellations of Leo, Virgo, Ursa Major, Coma Berenices and Canes Venatici. The first three are bright, well-known constellations; the last two are faint areas of sky with hardly any bright stars. In fact, these constellations contain many more galaxies than they do stars.

Most beginners want to start with Ursa Major, because it contains the famous Big Dipper. Unfortunately, its galaxies are fairly hard to find. This is especially true of the famous Pinwheel Galaxy (M101), which, although bright, is spread over a large area of sky. For that reason, it is actually easier to see with binoculars than with a telescope. The Whirlpool Galaxy (M51), just off the end of the Dipper’s handle, is much easier to spot. Look for its companion NGC5195 close by. In a really dark sky, you can see a faint bridge of stars joining the two.

The galaxies in Leo are much easier targets, especially the pairing of M65 and M66. [Most Extreme Stargazing Objects in the Night Sky]

But it’s Virgo that holds the real treasure trove of galaxies. Messier cataloged 11 galaxies in this constellation, along with eight in neighboring Coma Berenices. This area is so rich in galaxies that the problem lies not in finding them, but in identifying which galaxy is which. This is where a good star atlas or planetarium program comes in handy.

Experienced observers who have seen all the objects in Messier’s catalog should not neglect this area. For every galaxy Messier noted, there are dozens more to be found in the "RASC Finest NGC catalog," the "Herschel 400 catalog" and the "Caldwell catalog."