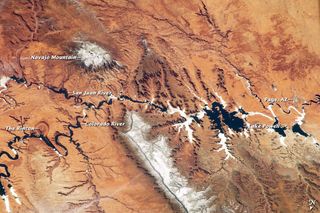 A jagged scar etched in copper-colored rocks, the Colorado River's channel curls through one of the world's most scenic landscapes.

Draining seven states and two countries, the river is one of the Southwest's most important water sources. One of its major reservoirs, Lake Powell, can be seen from space in a photo snapped March 12 by an astronaut aboard the International Space Station.

Sunglint (reflected sunlight) gives the water a mirrorlike sheen, reports NASA's Earth Observatory. In the photo, the river runs left to right because the astronaut was looking at the river canyon from the south. North is to the bottom of the image.

An abandoned river meander, called The Rincon, stands out like a pimple at the left edge of the photo. The long, knife-sharp edge of the snow-dusted Straight Cliffs, a plateau in the Grand Staircase-Escalante National Monument, divides the middle.

This story was provided by OurAmazingPlanet, sister site to SPACE.com. Email Becky Oskin or follow her @beckyoskin. Follow us @OAPlanet, Facebook or Google +. Original article on LiveScience's OurAmazingPlanet.