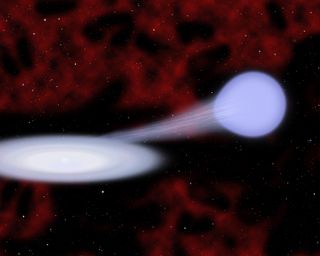 This artist's conception shows the suspected progenitor of a new kind of mini supernova called Type Iax. Material from a hot, blue helium star at right is funneling toward a carbon/oxygen white dwarf star at left, which is embedded in an accretion disk. In many cases the white dwarf survives the subsequent explosion. Image released March 26, 2013.
(Image: © Christine Pulliam (CfA))

Astronomers have discovered a new kind of supernova, a star explosion so weak that scientists dubbed it a miniature stellar blast.

Supernovas represent the deaths of stars, which collapse in powerful explosions. They generally are classified into two main types; the new class, called Type Iax, "is essentially a mini-supernova," said lead researcher Ryan Foley, an astronomer at the Harvard-Smithsonian Center for Astrophysics. "It's the runt of the supernova litter."

Supernovas are the most powerful stellar explosions known to science, visible all the way to the edge of the universe. The first of the two main flavors, Type Ia supernovas, happen after a white dwarf star dies from siphoning off too much mass from a companion star. In contrast, Type II supernovas occur after the core of a star about 10 to 100 times as massive as the sun runs out of fuel and collapses into an extraordinarily dense lump in a fraction of a second, blasting luminous radiation outward.

In 2002, researchers began noticing that many supernovas appeared to be similar to regular Type Ia supernovas, but were distinctly fainter. Some shone with only 1 percent of the peak luminosity of Type Ia supernovas. Now, based on past and new observations, Foley and his colleagues have identified 25 examples of what they call Type Iax supernovas. [Amazing Photos of Supernova Explosions]

"This really is a new kind of stellar explosion," Foley told SPACE.com.

It remains unclear what precisely happens during a Type Iax supernova. The helium in the companion star's outer shell might undergo nuclear fusion, blasting a shock wave at the white dwarf that makes it detonate. On the other hand, all the helium the white dwarf accumulated from its companion star could alter the density and temperature of the white dwarf's interior, forcing carbon, oxygen and maybe helium within the star to fuse, triggering an explosion, Foley explained.

"The star will be battered and bruised, but it might live to see another day," Foley said. "We're not quite sure why only part of the star might get destroyed. That's a tough problem we're working on right now."

"Type Iax supernovas aren't rare, they're just faint," Foley said. "For more than a thousand years, humans have been observing supernovas. This whole time, this new class has been hiding in the shadows."

No Type Iax supernovas have been seen so far in elliptical galaxies, which are filled with old stars. This suggests these supernovas come from young star systems.

The future Large Synoptic Survey Telescope in Chile is expected to detect 1 million supernovas over its lifetime, meaning it should discover more than 10,000 Type Iax supernovas — about as many Type Ia supernovas as astronomers have discovered to date, the researchers say.

"There's also the possibility there are Type Iax supernovae that are very nearby that we can look at for more answers," Foley said. "We'd want to know things like how often a star loses half its stellar mass, or a tenth. Right now, we don't have the statistics to answer some of these questions."

The scientists detailed their findings in a paper accepted for publication in the Astrophysical Journal.