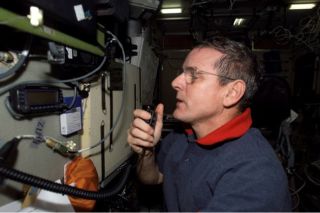 Armed with a video camera and senseof humor, the commander of the International Space Station (ISS) is workinghard to show students on Earth the ins and outs of orbital life.

ISSExpedition 12 commander BillMcArthur has tackled everything from a space station tour to theorbital lunch menu in a series of video vignettes aimed at sharing the humanspaceflight experience.

"If you think this is really fun,you're absolutely correct," McArthur said this week while narrating a videotour of the space station that he had recorded earlier. "The nice thing is, ifyou decide it's easier to travel on the ceiling...well, have at it."

McArthur and NASA ISS astronautssince Expedition7 have documented their experiences via video or other means as part of theagency's educational effort to reach students and the public, NASA educationofficials said.

For Expedition 12, McArthur andflight engineer Valery Tokarev have highlighted their holidaymeals and the differences between Russian and U.S. spacesuits.They have also detailed how the station is controlled by laptop computers,where its power comes from, as well as other facets of orbital living. Theprograms have aired on NASA TV.

"He loves it," said McArthur's wifeCindy, who also serves as an education specialist at NASA's Johnson SpaceCenter (JSC) in Houston, of her husband in a telephone interview. "He's atalker anyway, he likes to talk."

Cindy McArthur said that theEducation Office at JSC works each ISS-bound NASA astronaut to plan out theirprograms, and also oversees their radio or video downlinks with schoolchildrenback on Earth.

While some of the work is plannedinto an ISS astronaut's daily schedule, many crewmembers choose to use theirfree time - such as weekends - to record messages, NASA officials said.

ISSExpedition 13 flight engineer Jeffrey Williams, who is set to launchtoward the space station next month with mission commander Pavel Vinogradov andMarcosPontes - Brazil's first astronaut - hassaid that he hopes to keep journals or log entries to relate his orbitalexperience.

"This gives [the public] someinsight as to what's its really like," said Ed Pritchard, NASA's programdirector for teaching from space, of McArthur's videos. "That, while things aredifferent up there...they do have the same rigors that they go through."

According to Bill McArthur - who is nosmall fan of U.S. Army football - some of those rigors are as basic asavoiding doors and using the restroom.

"I'm slowing down because if youslam into one of these hatches...it hurts," McArthur said as he passed thehatches between ISS modules only to reach a vital ISS room. "This is animportant an important area in the station and we get a lot of questions aboutthis area. Yes, it's the toilet."

Glib aside, McArthur's videos havetouched on almost every aspect of his six-month mission, NASA officials said.

"I think most astronauts arelife-long learners," Cindy McArthur said. "They want to share that journey theytook to get to the space station...they think about spaceflight and love theconnection to life on Earth."

He and Tokarev have lived aboard thespace station sinceOct. 3, 2005, and have performed two spacewalks,a series of experiments and a Soyuz spacecraft relocationduring their mission. The astronauts will return to Earth aboard their SoyuzTMA-7 spacecraft in early April.

"I have always been amazed that I amable to fit into such small location," McArthur said of his Soyuz seat in thevideo tour.

Even more amazing, the astronautsaid, is the view of Earth through the window ports built into the spacestation's floor.

"You look down, and it's almost asif you're in this great ship that's sailing above the Earth," McArthur said.