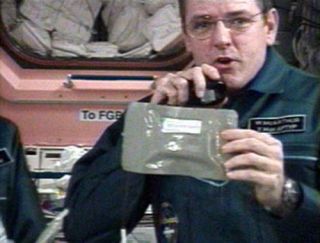 It may notbe fresh out of the oven, but Thanksgiving dinner will still be a treat for twoastronauts circling the Earth aboard the International Space Station (ISS).

“I’mgoing to try to prepare, what for the McArthur family is a traditionalThanksgiving dinner,” McArthur said during a videomessage describing his upcoming holiday meal. “Did you know thatmashed potatoes with onions could be dehydrated?”

McArthurand Tokarev are in the eighth week of their six-month mission aboard the ISS.

WhileTokarev said Thanksgiving is a primarily American holiday, he looks forward tosharing the day with his spaceflight partner.

“Wedon’t have so many options of celebration for the day in Russia,”said Tokarev, a cosmonaut with Russia’s Federal Space Agency. “Butwe also like to get together for some celebration. We are like brothers onboard.”

“Theyfeel a little bit like Styrofoam before they’ve had water,”McArthur said of the dehydrated vegetables.

Spacestation astronauts sample a full menu of available U.S. and Russian food beforelaunch to allow nutritionists to set up a 10-day in-flight meal rotation. Whilethey don’t have chilled water available for cold items, they do have warmand hot water available for rehydration, as well as food warmer for otheritems, NASA officials said.

“Eachday is set up with three meals and a snack,” said Vickie Kloeris, flight foodsystems manager at NASA’s Johnson Space Center in Houston. “But wedon’t really store a Thanksgiving meal per se.”

Instead,meals aboard the ISS are pantry style, with astronauts choosing from thevariety of foods in their 10-day schedule, Kloeris said. Shipping up specificholiday foods to the ISS is tough since their menus are prepared months inadvance when some theme items are not in season, but general foods – liketurkey – can be set aside in space or included in bonus treat containersfor each astronaut, she added.

“Forme, cranberries have always been a traditional part of our Thanksgiving dinner,”McArthur said,waving a sealed package of the fruit before the ISS camera in the videomessage.

Futureastronauts serving aboard expeditions to Moon or Mars may have more on their holidayplate than the ISS crew.

Thepotential to grow vegetables, fruits and other plants on a lunar or Mars basewould add a much appreciated texture to mealtimes, NASA officials said. Initialshort trips to the Moon will likely rely on the same foodstuffs used aboard theISS, but long duration trips could expand their diet, they added.

A liveturkey will still not be in the cards for lunar Thanksgivings, but packaged andirradiated versions can still be shipped up to future explorers, Perchonoksaid.

“We’rein a closed environment and you may not want to live so close to live animals,”Perchonok said. “But instead of dehydrated mashed potatoes and candiedyams, you could make it from real vegetables.”

In additionto the tasty advantages of cooking at least some of your dinner from fresh crops,there is also a psychological plus to new aromas, crunchy textures and thepresence of growing plants in a sterile environment, NASA officials said.

Aboard theISS, astronauts have grown soy beans, radishes and some other plants to studytheir growth, but the arrival of fresh fruits aboard Russian cargo ships hasalways been a landmark event.

McArthurand Tokarev are awaiting a fresh cargo delivery aboard the unmanned Progress 20supply ship set to dock at the ISS on Dec. 23 to deliver food, supplies andgifts to the station crew in time for Christmas.

“Perhapsthe most difficult thing for use being in orbit is being away from our family,”McArthur said. “But when we look down at the Earth, we realize that wehave a home planet and we realize that all members of humanity are one bigfamily with us.”