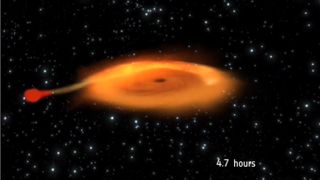 This still from a European Space Agency animation depicts the ultra fast star orbiting the black hole MAXI J1659-152. The star whips around the black hole every 2.4 hours at a mind-boggling speed of 1.2 million mph (2 million km/h).
(Image: © ESA)

Astronomers have spotted a star in our galaxy that races around a black hole at a breakneck speed, orbiting once every 2.4 hours, scientists say.

The black hole in the spinning duo is known as MAXI J1659-152 and is at least three times more massive than the sun. The star, meanwhile, is a red dwarf with a mass just one-fifth that of the sun and is just 620,000 miles (1 million kilometers) from the black hole, according to the European Space Agency, which announced the discovery on Tuesday (March 19).

"The companion star revolves around the common center of mass at a dizzying rate, almost 20 times faster than Earth orbits the sun," astronomer Erik Kuulkers, of ESA's European Space Astronomy Centre in Spain, said in a statement. "You really wouldn't like to be on such a merry-go-round in this galactic fair!"

The two objects orbit a common center of mass. Because the star is the lighter, it has a larger orbit and has to travel at a remarkable speed of 1.2 million mph (2 million km/h), making it the fastest moving star ever seen in an X-ray binary system. The black hole, meanwhile, orbits at about 93,000 mph (150,000 km/h), ESA officials said. The space agency created a video animation of the black hole and ultra-fast star to illustrate the odd setup.

The pair was initially thought to be a gamma-ray burst when NASA's Swift space telescope first spotted it on Sept. 25, 2010.  Japan's MAXI telescope on the International Space Station also observed a bright X-ray source at the same place on that same day.

More observations revealed that the X-rays came from a black hole siphoning material from a tiny star companion. From dips in these X-ray emissions during a 14.5-hour observation with ESA's XMM-Newton space telescope, astronomers calculated that the star's orbital period was just 2.4 hours. This orbital period smashes the previous record of 3.2 hours, held by Swift J1753.5–0127.

The newfound pair lies high above the galactic plane, meaning it is out of the main disc of our spiral Milky Way galaxy — a characteristic shared by only two other black-hole binary systems, including Swift J1753.5–0127.

"These high galactic latitude locations and short orbital periods are signatures of a potential new class of binary system, objects that may have been kicked out of the galactic plane during the explosive formation of the black hole itself," Kuulkers said.