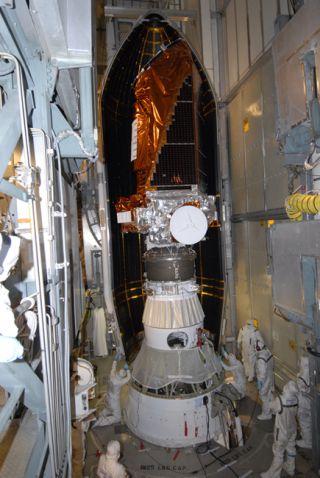 Workers attach the two-part payload fairing over the Kepler spacecraft in preparation for it March 6, 2009 launch from Cape Canaveral Air Force Station, Fla. The cover, designed to jettison shortly after launch, protects the spacecraft from the friction and turbulence as it speeds through the atmosphere during launch.
(Image: © NASA/Jack Pfaller)

After last week's devastating loss of a $273.4 million satellite just after liftoff, the heat is on for NASA to successfully launch its new Kepler spacecraft late Friday and begin its hunt for Earth-like planets around alien stars.

The launch is NASA's first since the loss of the Orbiting Carbon Observatory (OCO), which crashed into the ocean on Feb. 24 about three minutes after liftoff when its protective nosecone shell failed to separate as planned.

"There's pressure to be successful on every mission," said Jon Morse, director of the astrophysics division at NASA headquarters in Washington, D.C., in a prelaunch briefing today. "We've learned our lessons from OCO, and the launch services program has done an amazing job in the last week pulling together an analysis of any commonality with the previous launch."

NASA delayed Kepler's liftoff by one day to perform extra checks on its Delta 2 rocket to make sure it was ready for launch. After a thorough analysis, engineers gave Kepler's Delta 2 rocket a clean bill of health, finding no issues similar to that which doomed the Taurus XL booster that launched the OCO satellite, Morse added.

NASA is under scrutiny this week following a Government Accountability Office report citing that the agency is almost $1.1 billion over budget on nine different space projects, a list that includes Kepler and the agency's next flagship mission to Mars — the Mars Science Laboratory, according to the Associated Press.

The Kepler space telescope is dedicated to searching for Earth-like planets circling other stars in orbits that would be conducive to supporting life. The telescope cannot find proof of life itself, but it could identify candidate planets with the potential for habitability.

"This is a historical mission, it's not just a science mission," said Ed Weiler, NASA's associate administrator for science missions. "It really attacks the very basic human question that's part of our genetic code — 'Are we alone?'"

To date, astronomers have discovered nearly 340 extrasolar planets, but most of those have been gas giants the size of Jupiter or Saturn that orbit extremely close to their parent stars, researchers said.

Also known as the Goldilocks zone, the habitable zone around a star is a region in which a planet can orbit and still sport liquid water at the surface.

"The habitable zone is the area where things are just right," said William Borucki, Kepler's principal scientist at NASA's Ames Research Center in California. "The planets are not too hot, they're not too cold, they're just right."

To find those planets, Kepler will stare at a patch of sky near the constellations of Cygnus and Lyra for about 3 1/2 years and search for slight dimming in some 100,000 target stars — the telltale sign of an extrasolar planet.

After launch, Kepler will trail behind the Earth, orbiting the sun once every 371 days while keeping its gaze fixed at its target star field. The target covers an area about the size a human hand would cover if held against the sky at arm's length, Kepler researchers said.