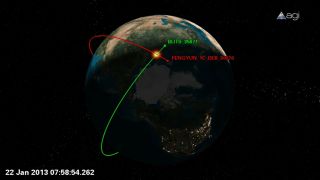 The apparent destruction of a tiny Russian satellite by a piece of Chinese space junk probably won't result in legal action against China, experts say.

The satellite and space junk crash involved Russia's Ball Lens In The Space nanosatellite, or BLITS, which likely collided on Jan. 22 with a piece of orbital debris spawned by a 2007 Chinese anti-satellite (ASAT) test that destroyed a defunct weather satellite known as FY-1C.

China could technically be held responsible for the current state of the 16-pound (7.5 kilograms) BLITS satellite under 1972's Convention on International Liability for Damage Caused by Space Objects, analysts point out.

"The Russian Federation, if it decided to open a diplomatic channel to China making a claim under the second scenario of the Liability Convention, would have to show that China was negligent in producing the fragment that struck BLITS and that there was no way that the Russian Federation could have avoided the collision," Michael Listner, of the New Hampshire-based firm Space Law & Policy Solutions,  told SPACE.com. [Watch the Animation: Russian Satellite Hit by Space Junk]

But Russia is unlikely to go down this road, Listner said, since BLITS — which was being tracked as part of an experimental campaign on precision satellite laser ranging — was relatively inexpensive compared to larger, more complex satellites.

Furthermore, China and Russia are currently are engaged in geopolitical cooperation, he added, and opening a can of worms over a nanosatellite probably wouldn’t benefit either nation politically.

If Russia decides to go ahead with a claim and diplomatic negotiations don't result in a settlement, the matter could end up in court. But Russia may have a tough time prevailing in a lawsuit, said Brian Weeden, a technical adviser with the Secure World Foundation, an organization dedicated to secure, sustainable and peaceful uses of outer space contributing to global stability on Earth.

First of all, Russia would have to show that the FY-1C piece did indeed cause whatever damage BLITS has sustained. The Russians have a good system for tracking space junk and other objects in low-Earth orbit, but it would probably be difficult for them to prove this claim with absolute certainty, Weeden said.

Russia would also need to demonstrate that China was at fault in the collision, and that could be another tall order.

"There's never been a court case on this topic, and there's no standard for what 'fault' or 'negligence' is in regard to collisions in space," Weeden told SPACE.com via email, stressing that he himself is not a lawyer. "I know lawyers who could probably argue that China is at fault because they deliberately destroyed the FY-1C in an ASAT test, but plenty of other lawyers who could argue that since there have been 6 years of natural forces acting on the orbit of the piece of Chinese debris, it was actually caused by force majeure."

"All of that means it's extremely unlikely anything definitive will come of this from some sort of lawsuit," he added.

There is a precedent for damages being paid out under the Liability Convention of 1972, Weeden pointed out. Canada sought $6 million in compensation after the Soviet Union's nuclear-powered Cosmos 954 satellite crashed in 1978, spreading radioactive material across a wide swath of northwestern Canada.

If Russia does decide to press a claim against China for the BLITS crash, it needs to do so by Jan. 22, 2014, Listner said, since the statute of limitations is one year for such cases.