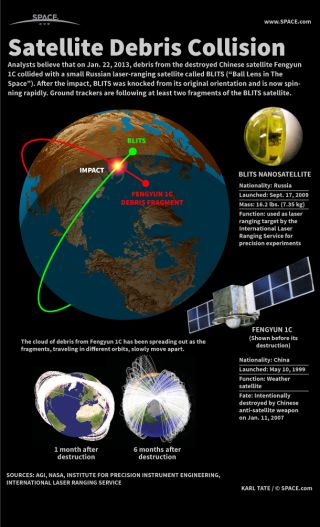 Analysts believe that on Jan. 22, 2013, debris from the destroyed Chinese satellite Fengyun 1C collided with a small Russian laser-ranging retroreflector satellite called BLITS ("Ball Lens in The Space"). After the impact, BLITS was knocked from its original orientation and is now spinning rapidly. Ground trackers are following at least two fragments of the BLITS satellite.

The BLITS nanosatellite was launched into a polar orbit by Russia on Sept. 17, 2009. The tiny satellite weighs 16.2 pounds (7.35 kilograms)

BLITS is essentially a glass ball, 6.7 inches in diameter (170 mm). Two outer hemispheres of low-refraction-index glass surround an inner ball lens made of high-refraction-index glass. One half of the sphere is covered with an aluminum coating. The satellite rotated for stability and to achieve a precise orientation. BLITS was used as laser ranging target by the International Laser Ranging Service for precision experiments.

The Fengyun 1C weather satellite was launched into a polar orbit by China on May 10, 1999. On Jan. 11, 2007 Fengyun 1C was intentionally destroyed. A "kinetic kill"anti-satellite vehicle was launched and intercepted Fengyun 1C at high speed. The collision shattered the satellite into many pieces.

The cloud of debris from Fengyun 1C has been spreading out as the fragments, traveling in different orbits, slowly move apart.