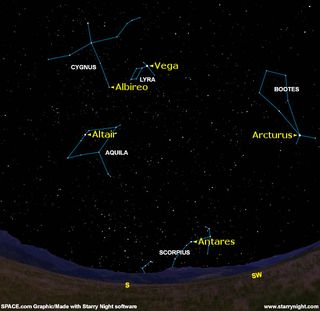 SKY MAP: Some colorful stars can be found using this map, which shows the sky at 11 p.m. in late July and early August for mid-northern latitudes.

One of the pleasures of stargazing is noticing and enjoying the various colors that stars display in dark skies. These hues offer direct visual evidence of how stellar temperatures vary.

A good many of the summer luminaries - such as brilliant Vega which stands nearly overhead during the late-evening hours - are bluish-white, but we can easily find other, contrasting colors there as well. Look at reddish Antares, and the yellowish-white Altair.

And considerably removed from this summer retinue, brilliant topaz Arcturus holds forth in solitary splendor in the western sky.

Probably the most colorful double star in the night sky can now be found nearly overhead at 11:30 p.m. local daylight time: Albireo in the constellation of Cygnus, the Swan, also known as the Northern Cross. Albireo supposedly marks the swan's beak.

A small telescope or even a pair of steadily held binoculars, will readily split Albireo into two tiny points of light of beautiful contrasting colors: the brighter one a rich yellowish-orange, the other a deep azure blue, both placed very close together. An absolutely stunning view will come with a telescope magnifying between 18 and 30 power.

If I'm with a group of people with my telescope under the summer sky, I always make it a point to look at Albireo, commenting that it's the star that commemorates the New York Mets, because of that ball team's colors of orange and blue.

Many people insist stars are just plain white. Certainly, star colors are not easy to see, chiefly because our eyes' color sensors - the cones of the retina - are quite insensitive to dim light. At night, the rods take over, but they are effectively color-blind. Only the brightest stars can excite the cones, unless binoculars or a telescope is used to intensify a star's light.

Color perception is aided further by the close juxtaposition of a contrasty pair of stars as in Albireo.

Albireo is believed by astronomers to be a physical pair bound by gravity, although there has never been evidence of any orbital motion between these two colorful stars. The projected separation between the two is just over 400 billion miles. At least 55 solar systems could be lined-up edge-to-edge, across the space that separates the components of this famous double star.

At least that's how it appears. It is possible that one star is much farther away than the other, and that they're not actually orbiting one another.

By the way, there is an interesting rule about the colors of telescopic double stars. If the stars of the pair are equally bright, they have the same color. If they are unequal in brightness, they have different colors. If the brighter star is the redder of the two, as in the case of Albireo, it must be a giant star; if it is the bluer, then it is what astronomers call a main sequence star, like our Sun.