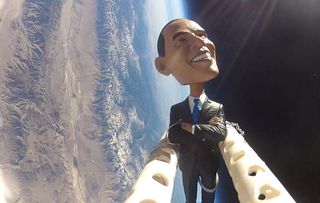 The students of the Earth to Sky project sent a bobblehead doll of President Obama flying on a weather balloon over Owens Valley, CA, on Nov. 5, 2012, in honor of Election Day.
(Image: © Earth to Sky Calculus Club )

GOLDEN, Colo. — Talk about ballooning expectations. How about launching your own payloads into the exotic environment of near space?

In the last year or so, for example, schoolkids have lofted a number of balloons to the stratosphere, including three carrying a Lego figure, a Hello Kitty doll and bobblehead versions of Barack Obama and Mitt Romney, respectively.

"You can launch hardware to the very edge of space on a budget," said Joseph Maydell, founder and chief engineer of High Altitude Science, which provides balloon-mission hardware and services. "We've adopted a keep-it-simple philosophy." [Barack O'Bobblehead Flies to the Stratosphere (Video)]

Bringing near-space science to the masses

Maydell is a former flight controller for the International Space Station at NASA's Johnson Space Center in Houston. Viewing downlinked images of Earth taken from aboard the orbiting lab helped inspire him to found Colorado-based High Altitude Science in 2011, he said.

“I was awestruck by the beauty of our planet and the ability to be in space," Maydell told SPACE.com. "I really wanted to share that with as many people as possible."

Weather balloons seemed like the most accessible and affordable way to make that happen, he added. High Altitude Science provides balloon launch services to customers with specific near-space needs — such as scientific research, space hardware prototype testing and advertising — and others interested in the sheer fun of it.

"We've got a wide plethora of customers," Maydell said, from folks interested in curve-of-the-Earth imagery to those who want to assess the speed of the jet stream or measure high-altitude temperatures and pressures. "Some are launching gliders from the edge of space or doing some other bigger research projects."

Weather balloons can rise to an altitude of 24 miles (39 kilometers) or more before they burst, and a payload may land (via parachute) up to 75 miles (120 km) away, depending on wind conditions at the launch site, Maydell said.

Though outer space doesn't technically begin until you get 62 miles (100 km) above Earth's surface, the views are still great from 24 miles up. At that altitude, the sky is black and the curvature of the Earth is clearly visible, Maydell said.

"It’s about the closest an average person can get to being in space, and you can do it for about the price of a nice iPad,” Maydell said.

Hello Kitty gets a ride

One recent user of High Altitude Science services was Lauren Rojas, a seventh-grader at Cornerstone Christian School in Antioch, Calif.

Rojas' Hello Kitty doll soared to an altitude of 93,625 feet (28,537 meters), gaining a spectacular view of Earth before coming back down in a tree-snagging parachute landing.

Hello Kitty's mission also involved onboard sensors to gauge temperature, air pressure and altitude, along with cameras that documented the ride.The video of Hello Kitty's trip has been an Internet sensation, garnering more than 820,000 views since it was posted on YouTube on Jan. 25.

Leonard David has been reporting on the space industry for more than five decades. He is former director of research for the National Commission on Space and a past editor-in-chief of the National Space Society's Ad Astra and Space World magazines. He has written for SPACE.com since 1999. Follow SPACE.com on Twitter @Spacedotcom, and on Facebook & Google+. Original article on SPACE.com.