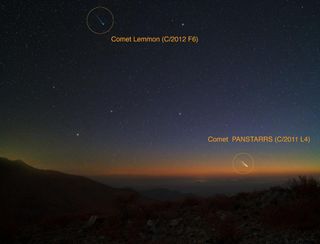 The brightening Comet Pan-STARRS is on track to put on a dazzling show for Earth-based skywatchers this month, and a German travel agency is offering some folks a chance to watch it from above the clouds.

Eclipse Travel in Bonn partnered with charter agency Air Partner and airline Air Berlin to organize the March 16 flight of AB1000, which promises to give a few dozen comet enthusiasts an up-close look at the rare event, according to Reuters.

With an astronomy expert on board, the flight will reportedly take a zigzagging path at an altitude of about 36,089 feet (11,000 meters) with just 88 passengers, ensuring everyone on the Boeing 737-700 a window seat.

Comet Pan-STARRS has been exclusively visible in the Southern Hemisphere since its discovery, and observers there have been watching it grow brighter against the sky at twilight in recent days.

The comet is expected to become visible in the Northern Hemisphere on Thursday (March 7), weather permitting, when it will rise very low near the west-southwest horizon about 30 minutes after sunset.

Known officially as comet C/2011 L4 (PANSTARRS), the comet was discovered in June 2011 by the Panoramic Survey Telescope & Rapid Response System, or Pan-STARRS, in Hawaii, which scans the sky for potentially dangerous asteroids and comets that could pose an impact threat to Earth.

Astronomers are also monitoring another approaching comet that could shine as bright as the moon and may even be visible in broad daylight later this year, if it lives up to its promise. Comet ISON is expected to peak in late November.