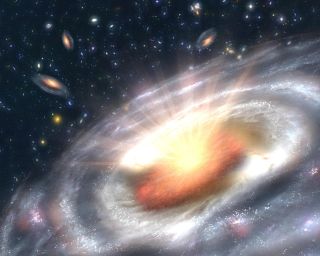 An artist's impression of a black hole like the one weighed in this work, sitting in the core of a disk galaxy. The black-hole in NGC4526 weighs 450,000,000 times more than our own Sun.
(Image: © NASA/JPL-Caltech)

The scientists participating in the briefing are:

NASA will stream audio of the teleconference, along with participants' visual aids, live at http://www.ustream.tv/nasajpl2. SPACE.com will carry the NASA feed here.

XMM-Newton is a grizzled space veteran by comparison. The telescope launched in December 1999 and has been probing X-ray emissions around the universe ever since.