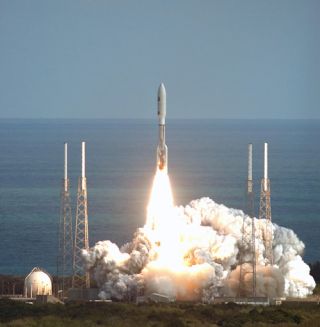 NASA'sPluto-bound NewHorizons spacecraft now speeding through the Solar System is set to reachJupiter on Feb. 28, 2007, but it will not be the first craft of its mission toreach the gas giant, mission officials said this week.

Launchedon Jan. 19, New Horizons is set to swing past Jupiter and use the planet'sgravity to boost it toward Pluto. But a Boeing-built rocket booster - the thirdstage that launched New Horizons on its way - will get there first, said Alan Stern,the mission's principal investigator, in an update this week.

Twonavigation burns set for Jan. 28 and Jan. 30 to refine New Horizons' flightpath will slow the craft enough to allow the Star-48 engine to overtake it,Stern said, adding that the engine will not reach Pluto before NASA's probe.

"It'llfling off in the general direction of Pluto, but will miss by 200 millionkilometers because it missed the precise aim point at Jupiter," Stern told SPACE.com.

On Jan. 29,New Horizons will pass out of Earth's orbit on its mission to one of our SolarSystem's most distant planets. The spacecraft launched away from Earth at about36,250 miles per hour (58,338 kilometers per hour) and should pass the orbit ofMars on April 8, mission managers said.

NewHorizons carries sevenprimary instruments to map Pluto and its moonsystem, as well as study the planet's composition and atmosphere. The probeis also designed to push past Pluto and explore at least one of themore-distant, icy KuiperBelt objects should its mission be extended.

Thespacecraft is expected to reach Pluto for its flyby on July 14, 2015. TheStar-48 rocket engine will reach Pluto's orbit, but not the planet itself, onOct. 15, 2015.