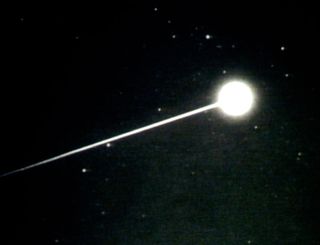 Stardust Capsule Return as seen from NASA's DC-8 Airborne Laboratory with a mission to explore the conditions during reentry from the light emitted by the fireball caused when the capsule streaked through the sky. The aircraft was located near the end of the trajectory, just outside of Utah landing site. The participating researchers are from NASA Ames, the SETI Institute, the University of Alaska, Utah State University, Lockheed Martin, U.S. Air Force Academy, the University of Kobe (Japan), and Stuttgart University (Germany). Image
(Image: © NASA)

When the Stardustcapsule blazed its way through Earth's atmosphere to a parachute landing in Utahearlier this month, the event was a preview of extraterrestrial attractions tocome.

Attention is nowturning toward other objects: the Moon, Mars, comets and asteroids, even Venusand Saturn's Titan--all are appetizing targets in the celestial sweet shop ofcosmic sampling.

"There was noevidence of heatshield distress or any unexpected grooving or pitting. When thecapsule was opened, it was pristine inside. There was no evidence of any leakingor heating trauma. It all looks cleanroom fresh on the inside. That's extremelygood news," Crocker told SPACE.com.

Space engineersare keen to do detailed engineering measurements on how much the capsule ablatedduring its fiery plunge to Earth on January 15. An essential element of thecapsule was its heatshield, resembling a blunt-nosed cone that thwarted theblistering temperatures reached during Earth reentry.

The backshell TPSis the same material used for the heatshields with the Mars Pathfinder missionand the Mars Exploration Rover missions--Spirit and Opportunity--and was firstdeveloped by Lockheed Martin for use on the Viking missions to Mars in the1970s.

In September2004, the Genesis spacecraft--also built by Lockheed Martin for NASA--deliveredits return capsule right on target into Utah. But due to improper placement ofonboard components that would activate the capsule's parachute recovery system,that hardware plowed into desert landscape at high-speed. Despite this ballisticblemish of an ending, scientists have apparently recovered meaningful sciencefrom Genesis-snared solar wind samples.

"Every kilogramof material that you put on a heatshield that's in excess of what you need for areasonable margin...that's a kilogram of payload that you can't put down on theplanet," Crocker said. "By reducing the uncertainty of how these things perform,it greatly improves our performance of the whole mission."

Leshin said sheand other scientists are anxious to dive into Stardust's captured comet grainsand study them in detail. She is a member of the Preliminary Examination Teamthat will get an early look-see at the samples.

"I predict thatwe will be blown away by the discoveries we will make in the next few months,"Leshin told SPACE.com. "We simply can't fly in space the equivalent ofthe thousands of tons of sophisticated lab equipment we have here on Earth. Soif we can't bring the instruments to the comet, we've got to bring the comet tothe instruments," she added.

Thanks toStardust's success, Leshin said, it's time to ask whether the same approach canbe utilized to bring precious samples from other objects back to Earth.

One such conceptfor a Stardust-like mission is tagged SCIM - short for SampleCollection for Investigation of Mars. This proposed ideawould "scim" through the martian atmosphere, sweeping up dust and gas samplesfor analysis back here on Earth, Leshin explained.

"Scientists havebeen calling for sample return missions from Mars for over 30 years, but theyhave always proven too technically challenging and expensive to undertake,"Leshin said. "With a mission like SCIM, we can get martian dirt back to Earthfor about 1/10th the cost of a more traditional sample return mission, and forabout half the cost of the Mars Rovers!"

Leshin is part ofa team currently working on a proposal to NASA to fly SCIM in 2011.

"Stardust is ahuge success of a mission," said Stephen Mackwell, Director of the Lunar andPlanetary Institute (LPI) in Houston, Texas. "In the coming months, as thesamples are analyzed, I anticipate a quantum step forward in our understandingof comets...bodies that still contain material from the earliest evolutionarystages of the solar system," he said.

Material snatchedfrom space by Stardust will be available to scientists from around the world.Researchers can study the samples using a broad array of conventional andinnovative techniques.

"It really doesgive great support to the concept of grabbing materials for analysis here onEarth. You can do so much more here than using instruments on a remote vehicle,"Mackwell noted.

For instance,take the work of the Spirit and Opportunity Mars rovers.

Mackwell offeredone hypothetical: "Just think what more we could have done with a scoop of Marsdirt, including a few blueberries, or a chunk of sedimentary layering, with afull chemical analysis and age dating, etc. back here on Earth," he said. Therovers have highlighted so many new questions that can only be answered for themost part by returned samples, he said.

The question ofsample return is much debated in the planetary sciences community, Mackwelladvised.

"Because samplereturn involves two-way travel, potentially including second lift-off from abody with significant gravity--Mars or Venus, for example--and issues of planetaryprotection...these missions are almost always expensive relative to orbitalmissions, or even landed missions with or without rovers," Mackwellsaid.

Added to thetechnical difficulty and cost, Mackwell continued, are societal issues withreturning samples from planetary bodies that may have once sustained some formof life.

"Even the remotechance that such lifeforms might be capable of biological interaction with Earthorganisms induces some level of paranoia, justified or not," Mackwell said. "Forthese reasons, sample return missions from Mars have remained just at the edgeof the future planning cycle for decades and have only recently been pushed evenfurther out. Return missions from comets, asteroids and other small lifelessbodies are still technically challenging, but cheaper and less likely to invokefear," he suggested.

NASA is not alonein bringing back the goods from space via automated capsules.

The former SovietUnion used the robotic dig and dash technique to fly back to Earth lunarspecimens.

Then there'sJapan's valiant Hayabusa probe. Late last year it reached out and touched anasteroid. That craft suffered hardware problems and is now limping back to Earthfor a 2010 capsule landing. Scientists still hold onto hope that Hayabusa maywell have tucked away bits and pieces of asteroid.

LPI's Mackwellspotlighted the value of sample return missions to other planetary bodies,notably Titan, with its exotic surface, and Venus, so much like Earth and yet sodifferent.

"Such missionswould greatly advance our knowledge of our solar system and evolution of theinteriors and surfaces of the planetary bodies and the diversity of environmentsthat exist within our corner of the universe," Mackwell said.

The gift thatkeeps on giving

The inevitablequestion is ascribing value of sample return to Earth contrasted to one-waylanders, surface rovers and other mobile hardware. And these tactics can becompared to what instrument-laden orbiters bring to the table.

The difficultyhere, Mackwell said, is just how much instrumentation can fit on outward-boundspacecraft. Not only are there power and mass issues, but what size sample canbe assessed and in what state.

"Samples arepieces of the surface and can provide ground truth for remotely sensed data,allowing calibration of orbital or balloon measurements. Thus, they makeremotely sensed data far more valuable. In addition, data derived from samplesprovide a unique perspective not offered by either orbital or in-situ[on-the-spot] data," Mackwell said.

Samples broughtback to Earth "are the gift that keeps on giving," Mackwell added, givenanalytical experiments on samples that can be modified "as logic and technologydictates."

And finally,returned samples, properly handled, permit scientists to assess any biologicalhazard on another planet, prior to sending humans, Mackwell concluded. "Giventhe huge potential return in science from samples returned to the Earth foranalysis, the additional cost of these missions is easily justified."