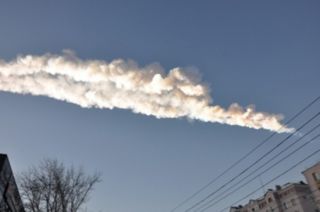 The dramatic fireball that exploded over Russia today (Feb. 15) was apparently the biggest such blast in more than a century, scientists say.

The object that caused the Russian fireball, which damaged hundreds of buildings and wounded perhaps 1,000 people in the Chelyabinsk region, was originally probably about 50 feet (15 meters) in diameter and weighed roughly 7,000 tons, said Peter Brown, director of the Center for Planetary Science and Exploration at the University of Western Ontario in Canada.

From multiple sensors using multiple technologies, a best initial estimate of the total energy of the event is about 300 kilotons of TNT-equivalent, Brown said, though he stressed that the number could change as scientists learn more.

“This could easily be in error by a factor of two," he told SPACE.com. "I am confident, however, that it is in excess of 100 kilotons, making it the largest recorded event since the 1908 Tunguska explosion." [Photos of Russia's Meteor Fireball Blast]

In a cosmic coincidence, the most recent Russian fireball exploded just hours before the 150-foot-wide (45 m) asteroid 2012 DA14 was set to cruise within 17,200 miles (27,000 km) of Earth today, marking the closest approach of such a large space rock that scientists had predicted ahead of time. The two events today are unrelated, NASA researchers say.

The time of the main explosion of the recent meteor was 10:20 p.m. EST on Feb. 14 (03:20:26 GMT on Feb. 15). The object was traveling about 40,260 mph (64,800 kph) when it entered the atmosphere, researchers said. Based on the long duration of the event and videos taken by observers, Brown said it is clear this was a very shallow entry, certainly less than 20 degrees and maybe even more shallow.

As for damage caused by the fireball detonation, the airblast clearly caused window breakage and light structural damage in downtown Chelaybinsk.

“The exact overpressure at which window failure occurs tends to be probabilistic and varies by construction design," Brown said. "As the fireball had a shallow trajectory, the cylindrical blast wave would have propagated directly to the ground and would be expected to be intense. This could be further compounded by any fragmentation [or] quasi-spherical blasts."

“My impression is that the key here is that the terminal part of the fireball — probably between 15-20 kilometers altitude — occurred almost directly over Chelaybinsk. This was perhaps the single greatest contributor to the blast damage… short range to the main part of the terminal detonation," he added.

As for event comparisons, Brown said the Sikhote-Alin meteorite impact of Feb. 12, 1947 in the former Soviet Union was the equivalent of about 10 kilotons TNT.

“But as an iron impactor, much of this energy was deposited at the ground rather than at altitude," Brown said. "The Oct. 8, 2009 Indonesia event is the most recent similar event, at about 50 kilotons, but [it occurred] over the ocean."

Brown cautioned that data on the event is preliminary.

“I fully expect revision of some of the numbers … particularly the estimate of the yield, which could easily change by a factor of two upon more complete analysis and will likely change as the day progresses,” Brown concluded.