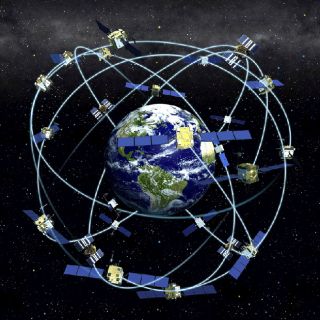 The orbits of GPS satellites are inclined to the Earth’s equator by about 55 degrees. The system is designed to ensure that at least four satellites are visible at least 15 degrees above the horizon at any given time anywhere in the world.
(Image: © NOAA)

Navstar is a network of U.S. satellites that provide global positioning system (GPS) services. They are used for navigation by both the military and civilians.

These 24 main GPS satellites orbit Earth every 12 hours, sending a synchronized signal from each individual satellite. Because the satellites are moving in different directions, a user on the ground receives the signals at slightly different times. When at least four satellites get in touch with the receiver, the receiver can calculate where the user is – often to a precision of just a few feet, for civilian use.

GPS signals used to be "degraded" for civilian use, meaning that they were only really precise in military applications. In 2000, however, President Bill Clinton authorized the switch-off of this "selective availability."

These days, many people take Global Positioning System devices for granted. Most people are familiar with the concept of using a GPS system (either as a stand-alone device or in a phone) to find one's way around. GPS can also identify a user's location, which is useful for orientation and even for fun activities such as geocaching (finding hidden caches with the use of GPS devices.) But there are other uses as well, besides location and navigation.

GPS can also be used for tracking, such as adding a tag to an animal to see the extent of its territory. The technology also assists with mapping, such as helping to better define the outline of a country. There are likely thousands of applications for GPS systems, ranging from everything to helping hikers navigate in remote areas, to assisting farmers with precisely seeding their fields, to assisting drones with finding their targets.

"The idea of going somewhere without satellite positioning and maps at your fingertips — or snapping photos without geotagging data — can be as alien to people these days as hitching up a wagon for a run to the feed store. It's an anachronism from another era," Digital Trends wrote of GPS.

Keeping submarines in the right direction

The U.S. Navy developed the first operational satellite navigation system – called Transit – in the 1960s. These "spin-stabilized" spacecraft – meaning that their spin kept the spacecraft pointing in the same direction – were first used for navigation in 1964 by Polaris submarines.

Even in those early days, however, the people who built the system could see scientific uses for GPS.

"Both of us have been enormously pleased at some of the past and present uses of satellite navigation, including the tracking of migrating birds and animals and effective search and rescue techniques that can pinpoint trouble in remote areas worldwide," wrote George Weiffenbach and William Guier, who both contributed to the build of Transit, in a 1998 article for Johns Hopkins University.

"Of course, we underestimated progress in electronics. In particular, we did not predict the incredible extent to which size and cost would be reduced for everyday applications for the mass market, e.g., navigation systems for our automobiles and pleasure boats, and even handheld units for hikers."

There were other early systems as well, such as the Navy's Timation satellite that tested the use of accurate clocks in space. This was an important predecessor to Navstar, as that GPS system relies on timing to keep the satellites synchronized.

Meanwhile, other branches of the U.S. military were working on their own navigation systems. With so many systems trying to keep users on track, eventually the military realized it might be worth it to develop a system that all of the branches could use.

In 1973, the Pentagon proposed a global positioning satellite system that today is known as Navstar.

"The main reasons for GPS development were the need to deliver weapons precisely on target, and to reverse the proliferation of navigation systems in the U.S. military," wrote Rick Sturdevant in a 2007 NASA book concerning space in civilian applications.

"From the beginning, however, the Department of Defense (DOD) recognized the usefulness of GPS to the worldwide civilian community."

Navstar is designed to operate with at least 24 satellites in orbit. The first generation of Navstar satellites began launching in 1978. Save for the failure of Navstar 7, in 1981, which failed to reach orbit, about 10 satellites built by Lockheed Martin made it into space.

Starting in 1989, according to Gunter's Space Page, the first full-fledged GPS satellites were launched. They were designed to operate 14 days without the need for intervention for the ground. Nine of these satellites launched in quick succession between 1989 and 1990.

GPS systems in the United States have gone through six major iterations since 1978. The latest block of satellites, called IIF, launched between 2010 and 2016. The 12 satellites are all designed to last 12 years. Some of their notable features include the ability to receive software uploads, better jamming resistance and doubling accuracy.

The GPS Block IIIA set of satellites — the seventh set of GPS satellites, and the first set of the third generation — is manufactured by Lockheed Martin. The block was originally supposed to start launching in 2014. However, technical delays pushed the first projected launch to May 2018. The series is expected to launch 10 satellites, with the last one scheduled for the second quarter of 2023.

GPS III has been in development since 1998, with funding available since 2000, according to Digital Trends. The new set of satellites will have four sets of civilian signals instead of the standard one. One of those new signals (known as L2C) has a stronger signal that will be easier to pick up under trees, inside or in challenging areas such as canyons.

The military will receive a benefit as well, with high-bandwidth M-code signals available. In some areas, this will enhance GPS signal strength 100-fold. So the military will have a stronger signal that is harder to jam, providing help for drones or for teams working in remote areas.

GPS for civilian users took a leap forward in 2000 when Clinton authorized the end of "selective availability." Previously, civilians received a much "coarser" view of their position because the military manipulated factors such as orbital data or the frequency of the satellite's clock.

It wasn't long, however, before civilians feared the option could be turned on again. The terrorist attacks of Sept. 11, 2001, on the World Trade Center and Pentagon prompted a raft of new security measures. Six days after the attacks, the Interagency GPS Executive Board stated there was no change to the United States' policy: to not use selective availability again.

In 2007, President George W. Bush accepted a recommendation to go a step further. On advice from the Department of Defense, he directed that the Navstar III generation would not have the ability to do selective availability at all. With GPS now a multi-billion dollar industry, it appeared commercial considerations had a strong voice in Washington.

"While this action will not materially improve the performance of the system," read a statement from the Department of Defense, "it does reflect the United States' strong commitment to users by reinforcing that this global utility can be counted on to support peaceful civil applications around the globe."

Unlike the early days, Navstar faces competition from other GPS-like systems built by other countries for civilian and military use. The Russians have a system called GLONASS, while the Europeans have another one called Galileo that is in the early stages of deployment.

With selective availability not included on the latest GPS satellites, the newer systems may track down locations for civilians to within just one foot, according to The Verge. A typical GPS locater today can pinpoint civilian locations to an accuracy of three to nine meters (10 to 16 feet.)