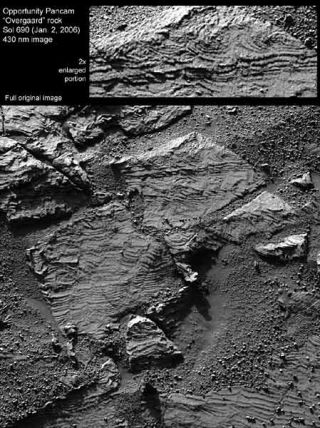 The Mars rover Opportunity is currently studying a rock dubbed 'Overgaard' at its Meridiani Planum landing site. On Jan. 19, 2006, the rover drove for the first time since late November 2005.
(Image: © NASA/JPL/Cornell.)

The roverrolled both backwards and forwards Thursday, repositioning itself at a newscience target and testing its ability to drive with its instrument-laden roboticarm in an elbow-out position, mission managers said.

"It's goodto be driving again," Jim Erickson, roverproject manager at NASA's Jet Propulsion Laboratory, told SPACE.com."It was sort of a combination between a test drive and going to an interestingtarget."

Opportunitydrove toward a rock named "Overgaard," traveling about 7.8 feet (2.4 meters) ina 'V' shape with its robotic arm's elbow jutting towards the front. The briefdrive marked the rover's first trip since late November 2005, when a broken wirein one of the shoulder joints for Opportunity's arm prevented the appendagefrom deploying.

Roverhandlers have spent that time conducting science observations and determiningthe best way to drive Opportunity with its arm only partially stowed. Opportunityand its robotic twin Spirit are designed to fold their respective robotic armsunder their forward undercarriages for safekeeping during drives.

"So far itlooks fine, but it will be awhile before we're sure about that arm position,"Erickson said of the elbow-out stance. "We'll be doing further analysis to seeif there are other poses that are better for the arm."

Opportunitywill spend its time studying "Overgaard" along the rim of Erebus Crater for thenext week or so before heading toward a new region of its Meridiani Planumlanding site, mission managers said.

Meanwhile,the Spirit rover is continuing its trek toward an interesting patch of Martianrock that mission scientists have called "Home Plate" after a brief pause toexamine soil churned up by its wheels.

"We wentthrough this soil and it was just white," Squyres told SPACE.com, addingthat the white-ish material appears to be a high concentration of ferric sulfatesalts. "It was just too tempting to pass up."

Spirit iscurrently about 984 feet (300 meters) from "Home Plate", and should reach thereby March 11 at the latest in order to complete its science objectives beforeheading off toward McCool Hill in the distance, Erickson said.

Named afterColumbia shuttle pilot WilliamMcCool, McCool Hill is part of the Columbia Hills chain at Spirit's GusevCrater landing site named after NASA's seven lost STS-107 astronauts. Spiritspent more than one year exploring nearby HusbandHill, with engineers planning to send the rover to the base of McCool bythe onset of Martian winter. The trip will allow Spirit to angle its solararrays toward the Sun for optimum power generation.

"Really,all we need to do is get to get to the beginning of McCool Hill, because we canclimb the hill in that position," Erickson said.