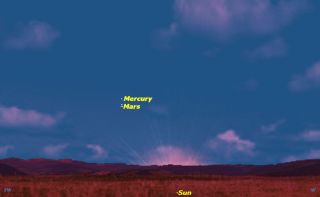 Mercury will be in a close conjunction with Mars on Friday February 8, low in the southwestern sky just after sunset.
(Image: © Starry Night Software)

Despite being among the brightest objects in the sky, Mercury is a planet very rarely seen by even experienced stargazers. The next couple of weeks offer the best opportunity in 2013 for observers in the Northern Hemisphere to spot Mercury's tiny speck of light in the evening twilight sky.

The trick for spotting Mercury is first to find an observing location with a low unobstructed western horizon, wait for half an hour after sunset for the sky to darken, and then sweep to the left of the sunset with binoculars. Once you've initially located the planet with binoculars, you can usually see Mercury with the unaided eye. Don't wait too late, or Mercury will have set. In a telescope, Mercury appears as a tiny "half moon."

Probably the earliest you can spot Mercury will be on Friday night (Feb. 8). This is a special night because Mars will appear very close to Mercury in the sky, giving observers a view of two planets at once.

Appearances are deceptive, though, because Mercury will be on the near side of the sun while Mars is on the far side, putting them 1.162 times the distance of the Earth from the sun (108 million miles, or 174 million kilometers) apart. Because of its greater distance from both Earth and the sun, Mars will appear 2.2 magnitudes fainter than Mercury on astronomers' brightness scale. [How to see more planets in Feb. night sky (Video)]

A second opportunity to catch Mercury and Mars will occur three evenings later on Monday (Feb. 11). Though not as close together, the near proximity of a slender crescent moon will make finding the pair easier. Look with binoculars for the "dark side" of the moon illuminated only by Earthshine: sunlight reflected from Earth.

A third opportunity to see Mercury occurs on Feb.15, when Mercury is at greatest elongation from the sun. This places Mercury at its highest altitude this month for observers in the Northern Hemisphere. Mars will probably have sunk too far toward the sun to be visible.

Why are some apparitions of Mercury better than others? It has to do with the angle between the observer's horizon and the ecliptic, the path that the sun and planets follow across the sky.

Take advantage of these opportunities to spot Mercury this month, and you’ll be able to say that you've seen something few astronomers have.

Editor's note: If you snap an amazing photo of Mercury in the night sky, or any other celestial object, and you'd like to share for a possible story or image gallery, please send images and comments, including location information, to managing editor Tariq Malik at spacephotos@space.com.