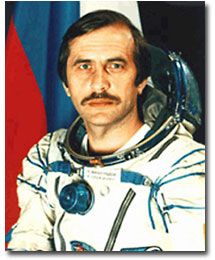 NASAformally announced the next crew bound for the International Space Station(ISS) Thursday, a two-astronaut team set to launch in mid-March aboard aRussian Soyuz spacecraft.

Alsolaunching toward the ISS with the Expedition 13 crew will be Brazilian AirForce Lt. Col. MarcosPontes, Brazil's first astronaut slated to fly in space. Pontes is expectedto spend about one week performing experiments aboard the ISS before returningto Earth with the station's current crew.

Vinogradovis a veteran of one previous long-duration spaceflight aboard Russia's MirSpace Station in 1997, while Williams, a U.S. Army colonel, served as a missionspecialist aboard NASA's Atlantis orbiter during the 10-day STS-101flight in May 2000.

Both menwill be onboard the ISS in May, when the current launch window opens for NASA'sSTS-121 shuttle flight aboard Discovery, NASA officials have said.

The STS-121test flight, NASA's second post-Columbiaaccident shuttle mission, is expected to deliver European astronaut ThomasReiter to the ISS, though the flight is pending the resolution of shuttlefuel tank foam issues. Reiter has been tapped as the first long-durationastronaut to be stationed aboard the ISS by the European Space Agency.

"All thesystems were checked [and] there was no data to suggest anything out of theordinary," Navias said, adding that similar false alarms have occurred in thepast in both the U.S. and Russian segments of the ISS.

McArthur,Tokarev and Pontes are expected to return to Earth in early April aboard theirSoyuz TMA-7 spacecraft.

Russian Soyuz spacecraft have proven vital for transporting astronaut crews to and from the space station. The dependable vehicles were the only spacecraft to ferry astronauts into Earth orbit during the two and one-half years NASA spent recovering from the 2003 Columbia accident. NASA's Discovery shuttle visited the ISS in July-August 2005 during the STS-114 mission, which marked the U.S. space agency's first post-Columbia spaceflight.