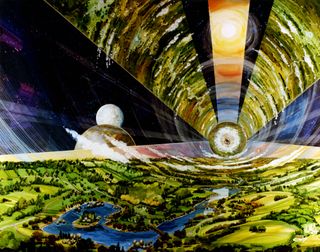 An artist's depiction of a vast cylindrical space colony ship containing more than a million people on a voyage to the stars. Artist Rick Guidice created this vision for NASA in the 1970s.
(Image: © Rick Guidice/NASA Ames Research Center)

In the Disney film "Wall-E," a colony of humans becomes an obese population after hundreds of years locked inside a spaceship. A lack of activity and an abundance of food left the starship denizens with little desire to stay in shape.

But while "Wall-E" was science fiction, but at least one anthropologist believes the human race will change when it embarks on multigenerational space missions to Alpha Centauri or other nearby stars.

To the thinking of Cameron Smith at Portland State University, evolution will continue on starships despite the best attempts to limit it.

"I believe that new pressure, breathing-gas compositions, gravity and radiation environments will act on the early stages of embryo and fetus development; this will be natural selection of new selective agents on the genome," Smith told SPACE.com in an email after stating his views in a recent Scientific American podcast.

"Precisely what new characteristics will be selected for or against, and spread or be deleted from the population, is very hard to predict, however." [Visions of Interstellar Starship Travel (Gallery)]

To keep evolution on a favorable track, the early space colonists should be screened as much as possible for genetic problems, Smith said.

But we are not completely sure yet what genes cause health problems, he cautioned.

"The old paradigm of assigning health issues to single genes is melting away as we discover that many maladies are polygenic — controlled by multiple genes — and can be activated by currently unknown environmental 'cues,' " he said.

He stressed that he doesn't mean breeding a "super-race" of humans, which would open moral issues.

An accompanying article he wrote in Scientific American pointed to a study of Swedish, Amish, Indian and Utah populations. The study showed that twice as many infants died when born to first cousins than when born to unrelated people.

Several anthropologists have suggested a minimum of 500 people would be needed to avoid genetic problems brought on by interbreeding, but Smith upped the safety factor to 2,000 residents to avoid a population collapse. That's about half the population of a typical aircraft carrier, he added.

Besides genetic changes, Smith foresees that the colonists will experience changes in their culture and technology. The art will change according to where the colonists live. (Certain astronauts already use music, poetry and artto talk about their experiences in space.)

The colonists will give birth to stories that talk about their shared experience in space, giving rise to differences that are already seen on Earth between, say, Australians and Americans.

"Colonists of Mars, for example, will retain some Earth culture but invent new artistic traditions according to new materials available," Smith wrote to SPACE.com.

One major factor, he added, could be the lighting conditions on Mars: The ruddy light outside and the artificial light in the pressurized habitat will be very different from what people experience on Earth.

Smith's day job is teaching human evolution, with a focus on modeling population genetics and demographics of small colonies. He also maintains a keen interest in spaceflight.

Among his hobbies, Smith communicates with Icarus Interstellar, an international group of scientists who are gradually working on designs for starships that could take flight to exoplanetslate in this century. Smith also is building a pressure suit that would function up to 50,000 feet in a balloon; he dubs the suit Project Alpha.

"I am inspired by Konstantin Tsiolkovsky... who devised basics of spaceflight almost entirely by mind, with few resources, almost a century ago," Smith wrote.

"He also did not expect a rapid leap to space colonization (which he wrote about extensively), but expected that it would occur sometime in the future, and proceeded in his thinking and designs ... So, my work will be a small piece of a very large puzzle."