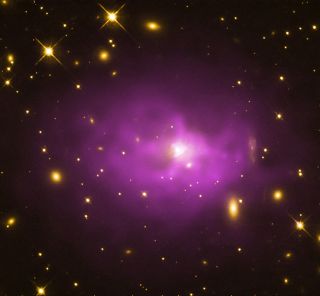 The bright spot at the center of this large elliptical galaxy is one of the biggest black holes in the universe, which scientists recently found is even bigger than previously thought. This galaxy is in the center of the galaxy cluster PKS 0745-19, which is located about 1.3 billion light years from Earth.
(Image: © X-ray: NASA/CXC/Stanford/Hlavacek-Larrondo, J. et al; Optical: NASA/STScI; Radio: NSF/NRAO/VLA)

A number of the largest black holes in the universe may be even bigger than previously thought, researchers say.

"Ultramassive black holes — that is, black holes with masses exceeding 10 billion solar masses — are probably not rare; several and even dozens of these colossal black holes may exist," study lead author Julie Hlavacek-Larrondo, an astrophysicist at Stanford University, told SPACE.com.

At the heart of virtually every large galaxy is a supermassive black hole weighing millions to billions of times the mass of the sun. Astronomers can detect the existence and approximate size of these black holes based on how they disturb the space and matter around them.

Now, using data from NASA's Chandra X-ray Observatory, researchers analyzing the brightest galaxies in a sample of 18 galaxy clusters find that at least 10 of the black holes in these galaxies are actually a whopping 10 billion to 40 billion times the mass of the sun. [Strangest Black Holes in the Universe]

"Some of our black hole mass predictions are just lower limits, so they could be higher," Hlavacek-Larrondo said. "Just how big do I think they can get? I would bet that a least one 100-billion-solar-mass black hole exists among our objects, which really is ultra-big."

The scientists estimated the masses of the black holes in this sample by analyzing the amount of X-rays and radio waves they generate when they gobble surrounding gas, dust and stars. In addition to the X-ray data from Chandra, the investigators also used radio data from the Very Large Array in New Mexico and the Australia Telescope Compact Array, as well as infrared data from the 2-Micron All-Sky Survey.

Once they had this data, the scientists deduced the size of the black holes by using known relationships between the amount of radiation they put out and black hole masses. This relationship, called the fundamental plane of black hole activity, applies to data on black holes with masses ranging from 10 solar masses to 1 billion solar masses.

Oddly, these black holes are about 10 times larger than one would expect from the size of their host galaxies.

"These results may mean we don't really understand how the very biggest black holes coexist with their host galaxies," said study author Andrew Fabian of England's Cambridge University. "It looks like the behavior of these huge black holes has to differ from that of their less massive cousins in an important way."

The answer to this mystery may have to do with where these black holes were discovered. All of these potentially ultramassive black holes lie in galaxies at the centers of massive galaxy clusters containing huge amounts of hot gas. Black holes probably generate the outbursts of energy that keep this hot gas from cooling and forming huge numbers of stars, researchers say.

To confirm these results, the researchers need to make detailed mass estimates of black holes by modeling the motions of stars and gas in the vicinity of these monsters. For instance, when it comes to the black hole in the center of the galaxy M87 — the central galaxy in the Virgo Cluster, the nearest galaxy cluster to Earth — stellar motions suggest M87's black hole is 6.6 billion solar masses, significantly higher than an estimate of 800 million solar masses calculated from infrared data.

"Our next step is to measure the mass of these monster black holes in a similar way to M87, and confirm their existence. I wouldn't be surprised if we end up finding the biggest black holes in the universe," said Hlavacek-Larrondo. "If our results are confirmed, they will have important ramifications for understanding the formation and evolution of black holes across cosmic time." [The History & Structure of the Universe (Infographic)]

Current models of black hole evolution "can explain ultramassive black holes, but you really have to push the models to do so," Hlavacek-Larrondo said. "If we are correct, and these objects are much more common and massive than previously thought, then we might need to rethink how they can grow to such masses."

That telescope, being constructed as a successor to the Hubble Space Telescope, is due to launch in 2018.

Hlavacek-Larrondo, Fabian and their colleagues Alastair Edge and Mike Hogan detailed their findings at the Einstein Fellows Symposium on Oct. 23 at Cambridge, Mass.