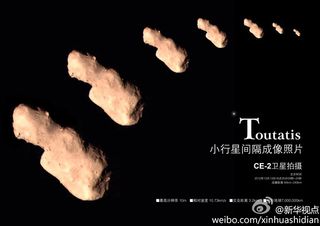 Chang'e-2 was launched on Oct. 1, 2010, the second moon probe launched by China as part of a three-phase lunar exploration effort.

The spacecraft's main mission was to scout for potential landing sites for China's first moon lander, the Chang'e-3 spacecraft, which is being readied for launch next year.

In a celestial hop-scotch scheme, the probe wrapped up its primary objective of orbiting the moon in June 2011. It then departed lunar orbit for the Earth–Sun L2 Lagrangian point, where Earth's gravity and the sun's pull just about cancel out. Arriving at that location in August 2011, the spacecraft was used to evaluate China's deep-space tracking and control network. [Video: Watch Asteroid Toutatis Tumble Through Space]

In mid-April of this year, Chang'e-2 departed its L2 position and headed for a rendezvous with asteroid 4179 Toutatis.

According to China's Xinhua state news service, Chang'e-2 successfully conducted a maneuver in which it flew by the asteroid Toutatis. The flyby took place on Dec. 13 and was announced by the State Administration of Science, Technology and Industry for National Defense (SASTIND).

Chang'e-2 reportedly came as close as 2 miles (3.2 kilometers) from Toutatis and took pictures of the asteroid.

"I have heard they have accomplished this … it would be a great accomplishment and demonstration of Chinese space navigational and operational capability," said Mark Sykes, director of the Planetary Science Institute in Tucson, Ariz.

"I will be very interested in seeing how any direct imagery of Toutatis compares with the radar imaging models — this would be a significant contribution to our science," Sykes told SPACE.com.

Toutatis was also observed by planetary radar specialists at NASA's Jet Propulsion Laboratory in Pasadena, Calif., snagging a sequence of images of the space rock as it whisked by Earth Dec. 12.

The observing campaign of Toutatis was carried out at the Goldstone facility in California.

Toutatis is an irregular and very elongated object. It's also a very slow rotator characterized by 5.4-day rotation about the long axis.

A number of radar images were taken using the Goldstone radio dish. Toutatis approached within 0.0463 Earth-sun distances to our planet (18 lunar distances) on Dec. 12.

The next opportunity for radar imaging of Toutatis will occur in late 2016 and early 2017. The next time Toutatis will approach at least this close to Earth is in November of 2069.