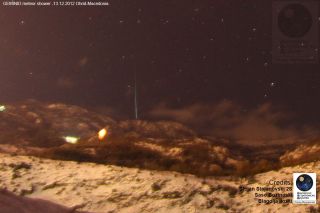 Across much of the United States and southern Canada, the weather prospects appear favorable for getting a view of the peak performance of tonight's Geminid meteor shower.

While mid-December is notorious for producing widespread cloud cover and precipitation, the latest forecasts suggest about three-quarters of the United States should have generally fair, clear weather for tonight's sky show.

The best weather is expected over the eastern third of the nation, where a large and extensive zone of high pressure will be in control. Centered over the Tennessee valley, this "fair-weather" system will ridge north and east to central New England and south and west to eastern Texas. Most places near or underneath this dome of high pressure should enjoy a clear view of tonight's display of shooting stars.

The situation unfortunately becomes more problematic over the western United States, where a storm originating in the Pacific will have moved inland into western Arizona. This storm is likely to bring rain showers to much of the desert southwest.

Across the high-terrain areas of central Arizona, western New Mexico, southwest Colorado, southern Utah and central Nevada, anywhere from 1 to 8 inches of snow could fall overnight. Yet another Pacific storm coming onshore near the coast of Washington likely will spoil a view of the Geminids for the Pacific Northwest.  [See the first photos from this year's Geminids ]

From reports received at SPACE.com already, the Geminids put on a marvelous display on Wednesday night (Dec. 12) and Thursday morning (Dec. 13), a full 24 hours before the shower's expected peak.

From Long Island, NY, Frank J. Mellilo wrote: "I was just out for a short while around 2:30 a.m. and for sure the Geminids are active!  The last one I saw was a small bolide (exploding meteor) with sparks at the end!  It was greenish and brighter than Venus!  Wow!!"

Observing from Coweta, Oklahoma, Bill Godley might have actually missed seeing the biggest meteor of the night, but took note of its effects on the local landscape: "While facing south, observing Geminids, some brilliant flaring was evident to the north, out of my direct view. It could have been a large, fragmenting fireball. Shadowing was evident and I sensed a red and blue color. The flaring lasted about 3 or 4 seconds. I guess magnitude -10 (as bright as half moon) but that is definitely a swag."

And observing from Beaver Hills Dark Sky Preserve in central Alberta, Canada, Bruce McCurdy commented that the Geminids "were happening in bunches all night, with some interesting cases of simultaneous meteors or nearly so (where the second one started before the first was done). A few fireballs in the mix."

Furthermore, the Geminids even called attention to themselves to those not specifically watching for them. While driving south on Route 231 toward Spencer and Bloomington, Indiana, a Geminid of magnitude -8 (about 40 times brighter than Venus) was visible to an observer reporting in on the Meteorobs Internet list.

Based last night's results, tonight should be just as good, or even better!  Be sure to bundle up (most of the nation will see sub-freezing temperatures tonight) and good luck.

Editor's Note: If you take a photo of this year's Geminids that you'd like to share with SPACE.com for a possible story or gallery, please send it, along with your comments, to spacephotos@space.com.