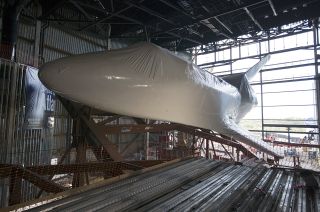 The countdown to space shuttle Atlantis opening on public display has moved into a "hold" — three stories off the ground. But instead of the clock ticking down T-minus 4, 3, 2, 1, the shuttle itself was ticked down to an angle of 43.21 degrees.

Workers at the Kennedy Space Center Visitor Complex in Florida shrink-wrapped, lifted and then on Monday (Nov. 26), slowly and carefully tilted the 152,700-pound (69,300 kilograms) retired spacecraft, such that they placed Atlantis at an angle only previously seen when it was in space.

Despite the precarious angle, Atlantis is secure in its final orientation.

"She is very comfortable and we're very confident she's in a great position," said Tim Macy, the director of project development and construction for Delaware North Parks & Resorts, which operates the visitor complex for NASA. "It is a good feeling to know that it's where it's supposed to be, that it's in place and we can take a little bit of a deep breath." [Rare Last Look Inside Shuttle Atlantis (Photos)]

The lift and tilt was achieved using industrial jacks from below, rather than cranes from above. The team practiced before raising the shuttle using a 130,000-pound block of concrete to stand in for the weight of the orbiter.

Angling Atlantis was the last of the planned moves for the retired winged spacecraft, which logged 125,935,769 miles (202,673,974 km) while flying 33 times to space, including on NASA's final mission of the 30-year space shuttle program. Earlier this month, Atlantis was delivered to the visitor complex from the nearby Kennedy Space Center and rolled into its new 90,000 square-foot home.

Before being raising the full 36 feet (11 m) into the air, Atlantis was shrink-wrapped — from nose to tail — in plastic, to protect it as its exhibition building is completed and more than 60 related displays and artifacts are moved in and positioned around it.

Atlantis will remain wrapped until March, when the plastic will be removed and preparations will begin to open its two 60-foot (18 meter) payload bay doors using a cable and pulley system suspended from the ceiling of the five-story building. In the meantime, work will continue on finishing the facility, including sealing its fourth wall, through which Atlantis entered.

Preparations also continue on the building's exterior, which was designed to immerse visitors in the space shuttle's story.

Featuring two sweeping architectural elements, or "wings" representing the shuttle's launch to and return from space, the outer layer of the building, which is being cloaked in iridescent hues of orange and gold, evokes the fiery-glow of re-entry. The taller, internal wing of the building is being covered in a shimmering tile pattern in varying gray tones designed to mimic the tiled underside of the orbiter.

At the entrance to the exhibit, guests will be greeted by a full-size, upright, replica external tank and two solid rocket boosters, expected to be installed in the coming months. On the opposite side of the tank and booster assembly, a silhouette of the orbiter will be attached to show guests its exact size and placement.

The 184-foot-tall shuttle stack will give visitors a sense of the massive size and power used to thrust the shuttle into low-earth orbit, before they get up close to the real thing — Atlantis.