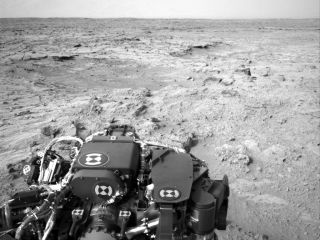 NASA's Mars rover Curiosity drove 83 feet eastward during the 102nd Martian day, or sol, of the mission (Nov. 18, 2012), and used its left navigation camera to record this view ahead at the end of the drive.
(Image: © NASA/JPL-Caltech)

NASA's Mars rover Curiosity has some plans this Thanksgiving, and they don't involve watching football in a food-coma stupor.

The 1-ton Curiosity rover will spend the holiday scouting out possible routes and target rocks for its first-ever drilling activity, NASA officials wrote in a mission update Tuesday (Nov. 20). The reconnaissance work follows a lengthy drive to an overlook the rover team has dubbed "Point Lake."

"Thanksgiving isn't so different on Mars. I had a long drive & plan to take photos. No pie, though," the Curiosity team said via the rover's official Twitter feed, @MarsCuriosity.

After sitting still for about six weeks to test out its soil-scooping gear for the first time, the rover made a short drive on Friday (Nov. 16), chugging 6.2 feet (1.9 meters) to get within robotic-arm's reach of a stone called "Rocknest 3," NASA officials said. [Photos: Curiosity's Latest Martian Views]

"We have done touches before, and we've done goes before, but this is our first 'touch-and-go' on the same day," Curiosity mission manager Michael Watkins, of NASA's Jet Propulsion Laboratory in Pasadena, Calif., said in a statement. "It is a good sign that the rover team is getting comfortable with more complex operational planning, which will serve us well in the weeks ahead."

At Point Lake, the rover team will use the main camera on Curiosity's head-like mast to help plan out the rover's initial rock-drilling activity. Curiosity's drill can bore 1 inch (2.5 centimeters) into rock, deeper than any other planetary explorer has been able to go.

Curiosity landed inside Mars' huge Gale Crater on Aug. 5, kicking off a two-year mission to determine if the Red Planet has ever been able to support microbial life. The $2.5 billion robot carries 10 different science instruments and 17 cameras to aid it in its quest.

Curiosity's heart is an instrument called Sample Analysis at Mars, or SAM, which takes up more than half its scientific payload by weight. SAM can identify organic compounds, the carbon-containing building blocks of life as we know it.

SAM got its first taste of Martian soil just this month, but the instrument has apparently already made a big discovery. Curiosity chief scientist John Grotzinger, a geologist at Caltech in Pasadena, told NPR that the find "is gonna be one for the history books."

The Curiosity team is still studying SAM's data to be sure of the results, Grotzinger added. Researchers plan to announce the discovery at the fall meeting of the American Geophysical Union, which runs from Dec. 3 to Dec. 7 in San Francisco.

While Curiosity won't be eating any turkey today, the three humans currently living off Earth certainly will. NASA astronaut Kevin Ford and Russian cosmonauts Oleg Novitskiy and Evgeny Tarelkin, the crewmembers of the International Space Station's Expedition 34 mission, get the day off and will celebrate with a Thanksgiving feast.