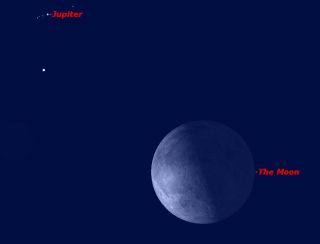 Jupiter and the moon in conjunction on the morning of Sept. 8, 2012.
(Image: © Starry Night software)

The largest of all of the planets in the solar system, Jupiter shines brightly in the sky despite its distance. Venus is the only planet constantly brighter than the gas giant, though at times Mars will give it a run for its money. Part of this has to do with its size and composition, but the planet grows brighter and dimmer depending on its distance from Earth.

How far is Jupiter from Earth?

Because both planets travel in an elliptical path around the sun, Jupiter's distance from Earth is constantly changing. When the two planets are at their closest point, the distance to Jupiter is only 365 million miles (588 million kilometers). From its closest point, Jupiter shines so brightly that even Venus dims in comparison. At its farthest, the gas giant lies 601 million miles (968 million km) away.

Jupiter takes 11.86 Earth-years to complete one orbit of the sun. As Earth travels around the sun, it catches up with Jupiter once every 398.9 days, causing the gas giant to appear to travel backwards in the night sky. This retrograde motion caused a number of problems to the original, sun-centric (or "Copernican") models of the solar system, whose perfect circles did not account for the apparent loop Jupiter and other planets made. It was not until Johannes Kepler determined that planets traveled in elliptical paths rather than circular ones that the problem was clarified.

How far is Jupiter from the sun?

In the solar system, the center of mass for most sun-planet systems (sun-Earth, sun-Venus, etc.) lies inside of our enormous star. But because Jupiter is so massive, the center of mass within the sun-Jupiter system actually lies outside of the diameter of the sun. It is the only planet whose center of mass is not located with the solar boundaries. As Jupiter orbits the sun, the giant world actually tugs on its star. Viewing similar wobbles in other stars allowed scientists to spot some of the first exoplanets.

How long does it take to reach Jupiter?

The time it takes a spacecraft to reach the giant planet depends on a number of things. The path of a craft often varies, as it slingshots off of planets, moons, and even the sun to gain acceleration while using less fuel.

The Galileo spacecraft launched in October 1989. It took just over six years to reach the gas giant, arriving in December 1995. But the craft took a very circuitous route, traveling a distance of 2.5 billion miles. It traveled around Venus, Earth, and the asteroid Gaspra to reach Jupiter.

Voyager 1, on the other hand, took only two years to reach the gas giant. Launched on September 5, 1977, Voyager 1 made its closest approach on March 5, 1979. This was because the Voyager mission was designed to take advantage of an ideal layout of the outer planets.

The New Horizons mission took a more direct path after its January 19, 2006, launch. On February 28, 2007, it performed a flyby of Jupiter on its way to Pluto and other dwarf planets. The travel time to Jupiter was just over 13 months.

The European Space Agency plans to launch its JUpiter ICy moons Explorer (JUICE) mission to Jupiter in June 2022. JUICE will rely on gravity assists from Venus and Earth to make the 7.6-year cruise to the giant planet.

NASA plans to launch the Europa Clipper mission to Jupiter's moon Europa in the mid-2020s. Launching with the new Space Launch System, scheduled for its first launch in 2018, could cut the travel time from eight years to three.

"This is one of those rare cases where time really is money," then-associate administer of NASA's Science Mission Directorate John Grunsfeld told members of Congress in July 2015.

The time it took each mission to travel to the gas giant varied, and depended not only on technological leaps in propulsion systems, but also in how the planets lined up with one another.