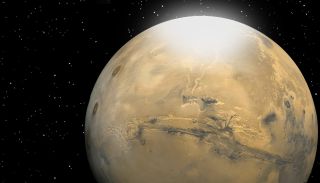 Researchers have calculated that carbon dioxide snow particles on Mars are roughly the size of a human red blood cell. Martian snow is depicted in this artist's rendering as a mist or fog that eventually settles to the surface.
(Image: © NASA, Christine Daniloff/MIT News)

A spacecraft orbiting Mars has detected carbon dioxide snow falling on the Red Planet, making Mars the only body in the solar system known to host this weird weather phenomenon.

The snow on Mars fell from clouds around the planet's south pole during the Martian winter spanning 2006 and 2007, with scientists discovering it only after sifting through observations by NASA's Mars Reconnaissance Orbiter (MRO). The Martian south pole hosts a frozen carbon dioxide — or "dry ice" — cap year-round, and the new discovery may help explain how it formed and persists, researchers said.

"These are the first definitive detections of carbon-dioxide snow clouds," lead author Paul Hayne, of NASA's Jet Propulsion Laboratory (JPL) in Pasadena, Calif., said in a statement. "We firmly establish the clouds are composed of carbon dioxide — flakes of Martian air — and they are thick enough to result in snowfall accumulation at the surface."

Hayne and his team studied data gathered by MRO's Mars Climate Sounder instrument during the Red Planet's southern winter in 2006-2007. This instrument measures brightness in nine different wavelengths of visible and infrared light, allowing scientists to learn key characteristics of the particles and gases in the Martian atmosphere, such as their sizes and concentrations.

The research team examined measurements the Mars Climate Sounder made while looking at clouds — including one behemoth 300 miles (500 kilometers) wide — from directly overhead, and from off to the side. These combined observations clearly revealed dry-ice snow falling through the Red Planet's skies, researchers said.

"One line of evidence for snow is that the carbon-dioxide ice particles in the clouds are large enough to fall to the ground during the lifespan of the clouds," said co-author David Kass, also of JPL. "Another comes from observations when the instrument is pointed toward the horizon, instead of down at the surface."

"The infrared spectra signature of the clouds viewed from this angle is clearly carbon-dioxide ice particles, and they extend to the surface," Kass added. "By observing this way, the Mars Climate Sounder is able to distinguish the particles in the atmosphere from the dry ice on the surface."

Astronomers still aren't entirely sure how the dry ice sustaining Mars' south polar cap — the only place where frozen carbon dioxide exists year-round on the planet's surface — is deposited. It could come from snowfall, or the stuff may freeze out of the air at ground level, researchers said.

"The finding of snowfall could mean that the type of deposition — snow or frost — is somehow linked to the year-to-year preservation of the residual cap," Hayne said.

Dry ice requires temperatures of about minus 193 degrees Fahrenheit (minus 125 Celsius) to fall, reinforcing just how cold the Martian surface is.

The study will be published in an upcoming issue of the Journal of Geophysical Research. Hayne performed the research while a postdoc at Caltech in Pasadena.