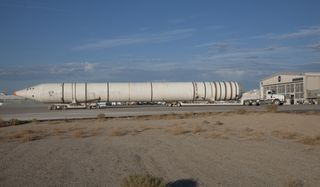 The twin 149 foot-long (45 meter) boosters are destined for a vertical display with NASA's space shuttle Endeavour. While the retired orbiter is set to arrive in Los Angeles next month, its launch pad-like exhibit at the California Science Center (CSC) won't be ready for several more years. Until then, Endeavour will be placed in a temporary, horizontal display while the rockets remain in storage at Dryden.

The inert boosters were previously displayed from 1994 through 2011 at NASA's Kennedy Space Center Visitor Complex in Florida. Their transfer to the CSC makes way for Kennedy's own exhibit of another retired shuttle, Atlantis.

During the 30-year shuttle program, the solid rocket boosters (SRBs) were more commonly moved in segments by train. The cross-country trip from the Kennedy Space Center (KSC) to southern California required a modified tractor-trailer rig.

"We decided to keep them whole for the trip from KSC to California. The reason? The tolerances for joining the segments together are so precise that we couldn't guarantee the ability to reassemble them here on the West Coast even if we had been able to take them apart back in Florida," Ken Phillips, the CSC's curator for aerospace science, wrote on Facebook. "That decision posed a challenge for the science center but it was an added bonus for all the folks who saw the SRBs along the route."

The largest solid rocket motors ever developed, the four-segment space shuttle SRBs weighed about 1.3 million pounds (590,000 kg) when loaded with more than 1.1 million pounds (500,000 kg) of propellant. The boosters were each capable of producing 2,650,000 pounds of thrust at liftoff, and provided the additional boost needed for the first two minutes of flight to escape the gravitational pull of Earth.

The boosters' propellant, which was primarily atomized aluminum powder fuel and ammonium perchlorate oxidizer bound together with a synthetic rubber compound, was developed at the Air Force Research Laboratory at Edwards AFB.