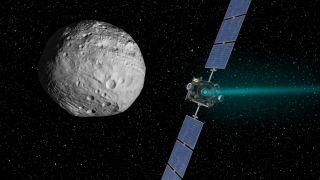 NASA's Dawn probe is gearing up to depart the giant asteroid Vesta next week and begin the long trek to the dwarf planet Ceres, the largest object in the asteroid belt.

The Dawn spacecraft is slated to leave Vesta on the night of Sept. 4 (early morning Sept. 5 EDT), ending a 14-month stay at the 330-mile-wide (530 kilometers) body. The journey to Ceres should take roughly 2.5 years, with Dawn reaching the dwarf planet in early 2015, researchers said.

"Thrust is engaged, and we are now climbing away from Vesta atop a blue-green pillar of xenon ions," Dawn chief engineer and mission director Marc Rayman, of NASA's Jet Propulsion Laboratory in Pasadena, Calif., said in a statement. "We are feeling somewhat wistful about concluding a fantastically productive and exciting exploration of Vesta, but now have our sights set on dwarf planet Ceres."

Dawn is spiraling away from Vesta as gently as it arrived last year. The spacecraft uses super-efficient ion propulsion, which generates thrust by ionizing xenon atoms with electricity. [Photos: Asteroid Vesta by Dawn Probe]

The $466 million Dawn mission launched in 2007 to explore Vesta and Ceres, huge and ancient objects that have borne witness to most of the solar system's history. Scientists hope Dawn's observations of these two bodies can shed light on our cosmic neighborhood's earliest days.

Dawn's stay at Vesta revealed that the massive space rock is a complex, layered body with an iron core. Based on these observations, researchers have concluded that Vesta is actually a long-surviving protoplanet — a planetary building block like those that coalesced to form rocky planets such as Earth and Mars.

Vesta appears to be the only such building block left, as the others were incorporated into planets or destroyed by collisions long ago, researchers said. Vesta itelf has taken a beating, with Dawn spotting craters from two colossal impacts over the past two billion years.

"We went to Vesta to fill in the blanks of our knowledge about the early history of our solar system," said Dawn principal investigator Christopher Russell, of UCLA. "Dawn has filled in those pages, and more, revealing to us how special Vesta is as a survivor from the earliest days of the solar system. We can now say with certainty that Vesta resembles a small planet more closely than a typical asteroid."