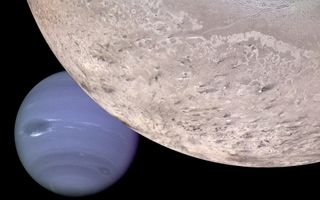 This computer generated montage shows Neptune as it would appear from a spacecraft approaching Triton, Neptune's largest moon.
(Image: © NASA)

This computer generated montage shows Neptune as it would appear from a spacecraft approaching Triton, Neptune's largest moon in this space wallpaper. The wind and sublimation eroded south polar cap of Triton is shown at the bottom of the Triton image, a cryovolcanic terrain at the upper right, and the enigmatic "cantaloupe terrain" at the upper left. Voyager 2 flew by Triton and Neptune on Aug. 29, 1989.