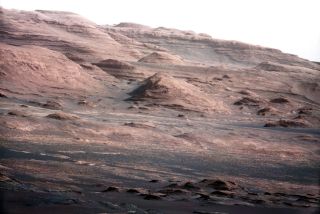 This photo from NASA's Mars rover Curiosity shows the layered geologic history of the base of Mount Sharp, the 3-mile-high mountain rising from the center of Gale Crater. Image taken on Aug. 23, 2012.
(Image: © NASA/JPL-Caltech/MSSS )

NASA's Mars rover Curiosity has snapped a stunning image of the base of Mount Sharp, showing the many-layered Red Planet rocks it may be investigating a year or so from now.

The photo, taken on Aug. 23 by Curiosity's 100-millimeter Mast Camera, captures a colorful, complex landscape that mission scientists have likened to the backdrop of old Western films.

The rocks hold considerable scientific as well as aesthetic appeal. The foothills of Mount Sharp — the 3.4-mile-high (5.5 kilometers) mountain rising from the center of Curiosity's Gale Crater landing site — show evidence of exposure to liquid water long ago.

Curiosity's main task is to determine if the Gale Crater area could ever have supported microbial life, so the rover team is keen to study Mount Sharp's layered deposits. Researchers reckon the six-wheeled robot could begin the roughly 6-mile (10 km) trek to the mountain's base — its main science target — by the end of the year, after Curiosity wraps up work at another site dubbed Glenelg.

The $2.5 billion Curiosity rover touched down inside Gale Crater on the night of Aug. 5. Its prime mission is slated to last one Martian year, or roughly two Earth years.