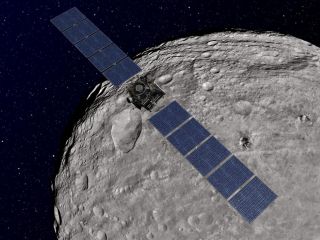 An artist's impression of the Dawn spacecraft in orbit around Vesta.
(Image: © NASA/JPL-Caltech)

WASHINGTON — NASA’s Dawn asteroid-belt probe will skip some bonus observations of one object, Vesta, and delay its departure for another, Ceres, by about 10 days because of a balky reaction wheel, the mission’s chief engineer says.

“The reaction wheel misbehavior occurred on Aug. 8, so that delays us by about nine or 10 days,” Marc Rayman, Dawn’s chief engineer and mission director, said in an Aug. 14 phone interview. “So escape [from Vesta] will be approximately Sept. 4.”

The Dawn spacecraft was launched in 2007 on an eight-year mission to study Vesta and Ceres, the two largest objects in the asteroid belt between Mars and Jupiter. The mission is being managed by NASA’s Jet Propulsion Laboratory (JPL) in Pasadena, Calif.

Rayman’s team will not begin its investigation into the reaction wheel-glitch until Dawn is on its way to Ceres, the larger of the two asteroids. The malfunction will not affect Dawn’s ability to reach Ceres, he said, adding that the spacecraft’s four reaction wheels would have been shut off for the two-year cruise anyway. [Photos of Asteroid Vesta by Dawn Spacecraft]

When Dawn needs to point itself at Earth to communicate with mission control in Pasadena it can use its thrusters to do so.

The bonus images of Vesta’s north pole, which Dawn was to capture before it left the asteroid, “would have been low resolution pictures anyway,” Rayman said. Besides, he said, “we have already gotten way, way more than we expected out of Vesta, or really even hoped. Our intent when we got to Vesta was to observe 80 percent of the surface. We’ve already observed much more than that.”

Reaction wheels are used to make the minute positioning adjustments required to keep precision observing instruments on target. This is the second time Dawn has had a reaction-wheel problem.

The first problem occurred in 2010. In both instances, the spacecraft’s onboard computer shut down the reaction wheel after detecting excessive friction, according to NASA statements.

A spokesman for Orbital Sciences Corp. of Dulles, Va., which built Dawn, said software uploaded to the spacecraft in 2011 to fix the first reaction-wheel glitch can be used again.

The $450 million Dawn spacecraft, launched from Cape Canaveral, Fla., aboard a Delta 2 rocket, reached Vesta last July. It is slated to arrive at Ceres in 2015. About 40 people, all of them JPL employees, are working on Dawn operations, Rayman said.