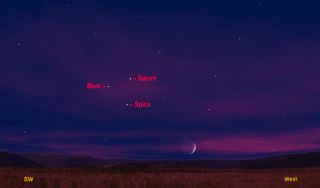 This sky map shows how Saturn, Mars and the bright star Spica will form a sky triangle on Monday night (Aug. 20, 2012). This map shows their location with the moon at 8:30 p.m. local time from mid-northern latitudes.
(Image: © Starry Night Software)

As soon as it gets dark on Monday night (Aug. 20) — say about an hour after sunset — look low toward the southwest horizon and you will see something rather striking: three "stars" forming an equilateral triangle, tilted a bit to the left. What will make this a rather eye-catching sight is that the three objects forming the triangle are of similar brightness, but of contrasting colors.

This triangle will remain in view until the trio sets less than an hour later. So if you wish to see it for yourself, you need to make sure you have a clear and unobstructed view (no tall buildings or trees) toward the southwestern part of the sky.

At the onset I dubbed these three objects "stars" because only one of the three is indeed a true star, the other two are planets.

The brightest of the three is the ringed wonder of the solar system, the planet Saturn; the object occupying the upper right corner of the triangle. Shining with a yellowish-white glow, Saturn has been enjoying a nice run as a conspicuous evening object, though in the coming weeks as it dips lower into the sunset glow and sets progressively earlier it will be more difficult to observe. [August Night Sky: Planet Spotting Guide]

If you have a telescope with an eyepiece magnifying at least 30-power, you’ll be able to make out the famous ring system. Currently, the north face of the rings is tilted about 14 degrees to our line of sight, making them relatively easy to see.

In the upper left corner of the triangle is the planetMars, shining more with a yellow-orange hue as opposed to red. Mars was much closer to Earth a half a year ago and at one point shone almost as brilliantly as Sirius, the brightest star in the sky.

But now, having receded to a distance of 162 million miles (261 million kilometers) from Earth, Mars appears only about one-tenth as bright. Still, it’s quite amazing to think that on this topaz speck of light now roams NASA’s Curiosity rover, exploring the desolate Martian landscape. The rover landed on Mars on Aug. 5.

The final member of the night sky trio is Spica, a bluish star, the brightest in the constellation of Virgo and located at a distance of 260 light years from us.

And as conspicuous as these three objects will be on Monday, be sure to check them out on Tuesday, when they make it a foursome, with arrival of a lovely crescent moon that will appear to hover just off to the lower left of Spica.

Editor's note: If you snap an amazing photo of Saturn, Mars and Spica, or any other night sky view, and you'd like to share for a possible story or image gallery, send images and comments (including name and location) to managing editor Tariq Malik at tmalik@space.com.