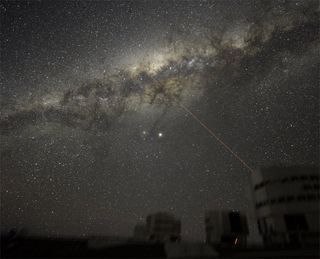 I seem to have been tempted away from tea by the seductive smell of coffee — it feels like I've cheated on my beloved Earl Grey. Spending most of my time in coffee shops writing about all things space, I find myself looking at the top of my skinny peppermint latte (really, you should try it!) and notice how the pattern on the top resembles the Milky Way as seen from above.

The fact that I know it resembles the Milky Way is pretty clever given that no one has ever come remotely close to getting such a stunning view of the galaxy we live in. It's a testament to human logic that has granted us the knowledge of the shape of our galaxy and it's a story that starts back at the beginning of civilization.

We can even go back to prehistoric times when man first looked at the sky and had a view that was completely unrestricted by artificial lighting. To our ancestors, the view would have been stunning with the ghostly glow of thousands of visible stars arching overhead.

It wasn't until invention of the telescope in 1608 and the curiosity of Galileo Galilei that things started to change. Galileo found that under magnification, the band of light separated out into thousands of individual stars.

Not much changed until the 18th century when another astronomer, William Herschel who was working from his own observatory in England, turned one of his large telescopes on the Milky Way to try and measure the distance to as many stars as possible.

Making the rather rash, yet incorrect assumption that all stars give off the same amount of light, he estimated their distance based on apparent brightness in the sky, fainter ones being further away than the brighter ones. We now know that stars vary considerably in the amount of light they give off, so his distance estimates would have been quite wrong even though he was just working on relative distances rather than absolute.

ANALYSIS: Discover Your Own Tiny Galaxy

That said, Herschel correctly drew the conclusion that we are located inside a giant disk of stars with the Milky Way representing the plane of the disk.

Other than Herschel's disk-shaped view of our galaxy, very little was known about the actual size and shape until 1914 when another astronomer called Harlow Shapley started to study clusters of stars with the 60 inch (1.5 meter) reflecting telescope at Mount Wilson observatory in California. He found that these clusters seemed to contain a type of variable star whose actual light output was directly linked to how long it took the star to brighten from minimum to maximum brightness.

By observing these very special Cepheid variable stars in distant clusters, Shapley could time how long it took for them to change in brightness and therefore deduce how much light they really produced. Comparing this to how bright they appeared in the sky would allow him to calculate their distance and hence our distance to the cluster.

ANALYSIS: An Astronomical Tour in the Realm of Galaxies

Since Shapley's studies, a lot more has been learned about the shape of the Milky Way primarily by using radio telescopes to study the locations of clouds of hydrogen gas out of which stars form. By mapping their distances and locations, a picture emerges of a galaxy shaped like a flattened disk with spiral arms emanating from a bar which runs across a central bulging nucleus.

The name for this type of galaxy is, unsurprisingly, a "barred spiral galaxy." A good analogy of the appearance of the Milky Way from the side is two fried eggs stuck back to back with the white representing the plane along which the spiral arms exist and the yoke represents the central bulge.

More detailed studies of the motion of gas clouds at the center of the galaxy show that there is a central object of very large mass. By measuring the speed of the orbiting gas clouds it's possible to determine the mass of the object — it has now been confirmed that a supermassive black hole lurks there.

My coffee cup is now drained and I'm getting looks from the waiters suggesting I should either buy another or perhaps consider moving on. I think, in the interest of being able to sleep tonight, the latter.