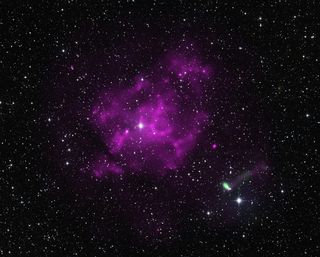 Racing away from the supernova remnant where it was born, a compact, rapidly rotating star, appearing green, may be the fastest-moving pular yet discovered.
(Image: © X-ray: NASA/CXC/UC Berkeley/J.Tomsick et al & ESA/XMM-Newton, Optical: DSS; IR: 2MASS/UMass/IPAC-Caltech/NASA/NSF)

Fleeing from the scene of a violent supernova explosion, a compact runaway star may be the fastest traveling pulsar yet discovered, scientists say. The small but powerful star is rushing away from the source of the blast almost 25 times faster than most similar objects move.

When the dust clears from a supernova, the outer layers of the dying star blow into space, leaving behind a neutron star, which is a city-sized object with a mass comparable to the sun.

"In a lot of cases, when the neutron star is not moving fast, you'll find it right in the middle of the supernova remnant," John Tomsick of the University of California, Berkeley, told SPACE.com.

Not so for IGR J11014-6103, a special type of rotating neutron star known as a pulsar. The explosion that created this object came with a kick that sent it flying away from its birth location at blistering speeds of between 5.4 and 6.5 million miles per hour.

In order for a neutron star to travel after a supernova, there must be some kind of push created by the stellar death, the researchers said. In a symmetrical explosion, the forces pressing on the new neutron star cancel each other out, and the star remains in the center, where the initial explosion occurred.

But if there is any type of asymmetry in the explosion, the stronger force imparts a kick to the compact star, sending it flying through space.

Scientists are still uncertain what causes these asymmetric explosions. Tomsick explained that there could be a correlation between the magnetic field of the neutron star and its strong kick, but nothing conclusive has been demonstrated yet.

Tomsick hopes that a closer look at the atypical IGR J10014-6103 pulsar could shed some light on the mystery.

"If we found that this neutron star had a high magnetic field, it would provide some evidence that it's related to the velocity," he said.

Lying in a bed of dust and gas about 30,000 light-years away from Earth, the energetic source first turned up in a survey of hard X-ray objects by the European Space Agency's Integral satellite. Tomsick and his team have performed follow-up studies of several of Integrals' new objects.

Initially, nothing about IGR J10014-6103 stood out. But, after examining the object using NASA's Chandra X-ray Observatory and ESA's XMM-Newton satellite, as well as the Parkes radio telescope in Australia, they realized a tail 3 light-years long trailed behind the source.

"When (the neutron star) plows through, it accelerates the particles that are in the interstellar medium," Tomsick said.

This creates a bow shock effect, much like a boat breaking through water. A slow-moving star forms a wider shock, while a fast-moving star produces a narrow one, such as the one formed by IGR J10014-6103.

Knowing that the supernova is 15,000 years old, and logging the distance the neutron star had traveled in that time, Tomsick and his team were able to calculate its speed.

Pulsars are a special type of neutron star that rotates rapidly, emitting a beam of high-energy that spins much like the bulb in a lighthouse. But astronomers have not yet been able to actually detect this signature beam from IGR J10014-6103.

According to Tomsick, the radio emission from the gas and dust surrounding the star make those pulses more difficult to read. In fact, the only way the pulses could have been seen with the current observations would be if the flashing neutron star was excessively bright.

"It could be a typical pulsar, and we still wouldn't be able to detect it," Tomsick said.

But the scientists are confident the object is a pulsar, rather than a regular neutron star, because of its high-energy emission and the fact that it doesn't show up in optical wavelengths. They intend to do more in-depth observations of the object in the near future, searching for details about its pulsation and its magnetic field.

"If we do a study in X-rays and still don't see pulsation, then we'll be pretty surprised."

Detailed results of the study were published in the May edition of the Astrophysical Journal Letters.