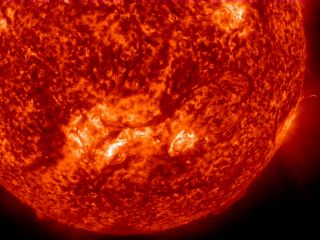 This image from NASA’s Solar Dynamics Observatory (SDO) shows a long, whip-like solar filament extending over 500,000 miles in a long arc above the sun’s surface between Aug. 6-8, 2012
(Image: © NASA/SDO)

A NASA spacecraft has beamed home a spectacular new view of the sun, a photo that captures a vast tendril of solar plasma reaching across the surface of our nearest star.

NASA's Solar Dynamics Observatory recorded the huge solar filament between Aug. 6 and 8, which rises up above the sun's surface in an arc that stretches across more than 500,000 miles (804,672 kilometers).

"Filaments are cooler clouds of solar material that are tethered above the sun's surface by unstable magnetic forces," NASA officials wrote in a photo description.

In a video of the solar filament recorded by the Solar Dynamics Observatory, it appears as a dark strand hovering over the brighter surface of the sun.

"Towards the end of the video, part of the filament seems to break away, but its basic length and shape seem to have remained mostly intact," NASA officials explained.

On the sun, solar filaments are similar to solar prominences in that both types of sun weather refer to huge loops of solar plasma extending upwards from the sun's surface. When the loops are visible along the edge of the sun (known as the limb), they are called prominences. When the loops appear on the face of the sun, also called the solar disk, the formations are referred to as filaments, according to a NASA data sheet.

When the unstable magnetic fields shaping solar filaments and prominences break, they can unleash huge eruptions of solar plasma into space.

The sun is currently in the active phase of its 11-year weather cycle that is expected to peak in 2013. The current cycle is known as Solar Cycle 24.