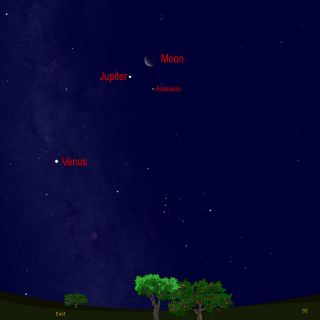 This sky map shows how Jupiter, the moon and Venus will shine before dawn on Aug. 11, 2012.
(Image: © Starry Night Software)

If you’re outside before sunrise on Saturday (Aug. 11) hoping to see a preview of this weekend's Perseid meteor shower, you'll be treated to a rather eye-catching array in the eastern sky.

Weather permitting, you'll be able to see a beautiful waning crescent moon, just 35 percent illuminated,  accompanied by a brilliant silvery "star" hovering below and to the left of the moon. But that's not a star, but the largest planet in the solar system, Jupiter.

Jupiter currently rises in the east-northeast just before 1 a.m. local time. An hour later this planet and the moon are both in fine view low in the east, shining about 5 degrees apart — which is about half the width of a clenched fist held at arm's length. As the eastern sky begins lighting up with the break of dawn, Jupiter has climbed halfway up in the east.

This month, Jupiter is a bright predawn planet located in the constellation Taurus, near to the orange star Aldebaran and the 'V'-shaped Hyades star cluster. The Pleiades star cluster shines well above the celestial arrangement. [August Night Sky: 2012 Viewing Guide]

Jupiter adds its luster not only to the nearby crescent moon above it, but also to the brilliant planet Venus lower down, and also to all those bright winter stars that embellish theAugust predawn sky. For those who don’t like the cold, now is an excellent time to observe those winter luminaries under summer conditions. The Hyades will keep Jupiter company throughout its current apparition until May 2013.

Keep in mind that what you’ll be seeing is all a matter of perspective.

Even though Aldebaran appears to be a member of the Hyades because of its perfect placement in the 'V' of this star cluster, it’s merely an innocent bystander, as it is less than half as close as the cluster at 65 light years away.

After Saturday, the moon will move on, eventually crossing paths with Venus on Monday (Aug. 13).  Jupiter will slowly increase in prominence during the coming weeks and months, ultimately becoming a fixture in the upcoming fall and winter evening sky.