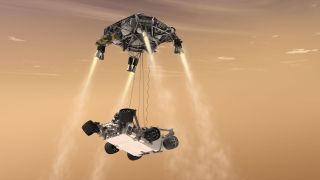 After NASA's Mars rover Curiosity touches down on the Red Planet tonight (Aug. 5 PDT; early Aug. 6 EDT), mission controllers will begin testing the rover's systems to make sure its onboard instruments survived the intense journey through the Martian atmosphere. During this time, the rover will beam back preliminary images from Mars, NASA says.

So, what can we expect to see in these first photos?

According to NASA officials, the first photos from the Curiosity rover will come from its one-megapixel Hazard-Avoidance cameras, or Hazcams, which are attached to the body.

"A set of low-resolution gray scale Hazcam images will be acquired within minutes of landing on the surface," Justin Maki, who led the development of Curiosity's 12 engineering cameras at NASA's Jet Propulsion Laboratory in Pasadena, Calif., said in a statement. "Once all of the critical systems have been checked out by the engineering team and the mast is deployed, the rover will image the landing site with higher-resolution cameras."

Curiosity is carrying 12 engineering cameras, which include eight Hazcams at the front and back of the rover, and four Navigation cameras (Navcams) at the top of the rover's so-called "look out" mast. These cameras snap black-and-white pictures from the rover's left and right stereo "eyes," which are then merged for three-dimensional observations. [Mars Rover Armed With Laser, Cameras & Curiosity (Infographic)]

Engineers on Earth will spend several days performing tests to determine if it is safe to deploy Curiosity's Remote Sensing Mast and its high-tech cameras, but the rover's first images may arrive just hours after its landing, agency officials said.

NASA is using its Mars Odyssey orbiter to relay signals from the Curiosity rover to Earth, so with the time delay, it may take more than two hours after the landing before the first photos are received by mission controllers.

These early images will be captured with the left and right Hazcams at the back and front of the rover. The first two photos will be small thumbnail copies, measuring 64 by 64 pixels in size, rather than full-resolution versions, NASA officials explained.

Curiosity's first photos will help engineers fill in details of the rover's surroundings, including its location and tilt.

"Ensuring that the rover is on stable ground is important before raising the rover's mast," mission manager Jennifer Trosper said in a statement. "We are using an entirely new landing system on this missions, so we are proceeding with caution."

Curiosity's Mars Descent Imager (MARDI) will capture color photos as the rover descends to the surface of Mars. These photos will help pinpoint the rover's location, and the first MARDI images are expected to be released on Aug. 6, the day after landing.

The MARDI images will also be thumbnails, but one full-resolution image may also be sent back at the same time, NASA officials said.

Other color photos of the surface of Mars are expected to arrive by the morning of Aug. 7, from the Mars Hand Lens Imager, one of five instruments on the rover's robotic arm. This camera is designed to take close-up pictures of rocks and soil, but when Curiosity lands, it will still be packed up and pointed to the side, which will allow it to snap an early color view of the rover's Gale Crater landing site.

Once engineers extend Curiosity's mast, the Navcams will begin taking one-megapixel stereo pictures of the rover's surroundings, 360 degrees around. These cameras are capable of resolving the equivalent of a golf ball 82 feet (25 meters) away, NASA officials said.

Navcams are designed to scan the Martian landscape and collect three-dimensional information, but can also be used to look up and down. Navcam photos will help scientists and engineers decide where and how to drive the rover, and which rocks to study closer with the rover's suite of 10 instruments.

"A large part of the surface mission is conducted using the images returned from the cameras," Maki said.

Photos from Curiosity's Navcams are expected to be sent back to Earth roughly three days after landing, provided the rover's mast is deployed on schedule, agency officials explained.

Approximately three days after landing, Curiosity's Mast Cameras (Mastcams) will likely begin taking their first photos. The two-megapixel Mastcams have narrower fields of view, and will be used to take detailed shots of Mars. High-resolution panoramic photos from the Mastcams are expected to arrive more than a week after landing, NASA officials said.