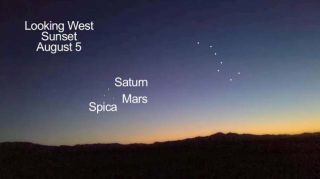 Saturn, Mars and Spica will form a "Martian Triangle" in the night sky on Aug. 5, 2012, just hours before NASA's Curiosity rover touches down on the Red Planet.
(Image: © Starry Night)

Hours before NASA's newest rover Curiosity touches down on Mars tonight, the Red Planet will put on an impressive show in the night sky to mark the historic occasion.

NASA's Curiosity rover, which is also called the Mars Science Laboratory, is scheduled to land on the surface of the Red Planet on Sunday night (Aug. 5) at 10:31 p.m. PDT (1:31 a.m. EDT Aug. 6; 0531 GMT). For those planning to stay up for the event, it might help pass the time to see the celestial meet-up in the night sky between Mars, Saturn and the bright star Spica.

Spica is the brightest star in the constellation of Virgo, and if conditions are favorable on the night of Curiosity's landing, observers will be able to see it team up with the planets Saturn and Mars to form a "Martian Triangle" that will be visible from almost everywhere on Earth, according to NASA officials.

The triangle between Saturn, Mars and Spica will be visible after sunset on Sunday. As the sky turns black, look west to where the setting sun slipped away. The three celestial objects will form a bright equilateral triangle, with angles of about 5 degrees on each side, NASA astronomers said in a statement.

The sky map with this guide shows the location of Saturn, Mars and Spica in the night sky, but their slightly different appearances should also distinguish them from one another. Spica will shine white, while Saturn will appear creamy, and Mars will glow with hints of orange, according to experts at Sky & Telescope magazine. [7 Biggest Mysteries of Mars]

From our vantage point on Earth, these three very different objects will seemingly shine with the same intensity. In reality, Saturn, Mars and Spica have very little in common. The small, rocky planet Mars is much closer to Earth than Saturn, the ringed gas giant that orbits farther out in the solar system. Spica, a massive binary star, is located on the other side of our galaxy's spiral arm.

Yet, since all three objects shine with such intensity, they are visible to observers on Earth with the unaided eye.

As you gaze up at Saturn, Mars and Spica, remember what is about to happen at the Red Planet. After the Martian Triangle sets, the Curiosity rover will be preparing to arrive at its destination, after journeying through space for almost 8.5 months.

To make its unprecedented landing on Mars, a rocket-powered sky crane will help lower Curiosity to the surface. As it descends through the Martian atmosphere, the rover's speed will be slowed from more than 13,000 miles per hour (21,000 kilometers per hour) to zero in only seven minutes.

Once it touches down, Curiosity will begin a roughly two-year mission to investigate whether Mars is, or ever was, a suitable environment for microbial life.

So, don't forget to look up in the sky on the night of Curiosity's landing. The rover may be millions of miles away, but you can still be part of the action.