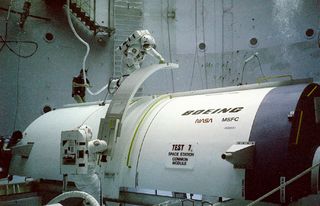 In this historical photo from the U.S. space agency, two astronauts practice construction techniques to build the Space Station in the Neutral Buoyancy Simulator (NBS) at Marshall Space Center (MSFC) in December 1985, early in the Space Station program.

NASA began operating the NBS at MSFC in 1968. The NBS provided an excellent weightlessness environment to astronauts and engineers for testing hardware designed to operate in space while also affording the opportunity to evaluate techniques that were used in space to assemble structures such as Skylab, Hubble Space Telescope and the International Space Station.

The NBS tank is 75 feet in diameter, 40 feet deep, and contains 1.3 million gallons of water, and can accommodates structures as large as the 43-foot Hubble Space Telescope mockup. Engineers direct NBS activities from a state-of-the-art control room located on the first floor adjacent to the tank.